Audiobook Review: Map of Fates (The Conspiracy of Us #2) by Maggie Hall 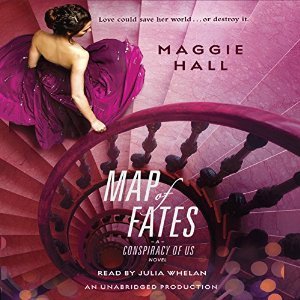 I listened to the first book in this series, The Conspiracy of Us, back in November, and was immediately impressed by this story.   The first book had so many secrets and plot points that we did find the answers to, but those also led to more secrets and mysteries that were what made up this second book in the story.  And the ending of the first book, let me just reiterate that it was a WHOA ending.  One that I really loved, and that was actually part of my favorite storyline in this second book, even if events in the 2nd book changed what kind of outcome I wanted for that little twist.  Now, if you haven't read the first book yet, then you need to click on the link at the beginning of this paragraph, because there will be some spoilers for that book here, especially when I talk about the big twist I just mentioned.

We are back with Avery and Jack.  Since they discovered the clues to Alexander the Great's tomb, left by Napoleon, they are on a deadline of two weeks to try to find the location to give to the dangerous group, the Order.  The reason Avery must do this, instead of just helping find it for her family, the Circle, is because the Order has kidnapped her mother and threatened to kill her if Avery doesn't give them what they want.  While she and Jack are together constantly, Stellan is often dropping in to help, with whatever resources he can provide.  Since Avery is the girl with the purple eyes that every family in the Circle wants to marry to their oldest son and heir, imagine the surprise at the end of the last one when Avery and Jack and Stellan discovered that Stellan was actually "the One" that Avery was supposed to have a union with in order to find the weapon in Alexander's tomb.

When Avery and Jack run into a dead end in the country where they start, Avery gives in to let her family help, at least enough that they can get passports and travel to destinations that she and Jack can continue to hunt.  But the problem is that her father wants her to go meet with all the possible heirs for her to marry and pick one.  Avery agrees to do this, since many of the locations will be places she wants to go in her search.  Until she and Jack know what they are looking for, they don't want to let anyone know about Stellan just yet.  They figure that is one card up their sleeve that they can hold back. Especially since Avery doesn't want to marry any of these heirs.  She is in love with Jack, although there is something about Stellan that is intriguing, even with his infuriating ways.

Things don't go that smoothly just because they have the help of the family though.  In fact, more tragedy occurs as the sons that she's met with end up getting murdered by the Order, and one is even killed when she is sitting right next to him.

It turns out that it isn't really the Order that they have to worry about in the end, and finding Alexander's tomb may turn out to be the salvation to the weapon that is not what was expected, and one that is way worse than anyone could have imagined.

I have to say that I'm totally Team Stellan now.  And the deaths in this book were really major ones that totally blew me away.  Now, I have to wait another year for the next book, and I can't wait to see where the author will take this story next, as my brain is just stumped on what in the world they can do to stop this.  And I loved that as I was listening to this audiobook, I was also reading Empire of Dust by Eleanor Herman, which is about Alexander the Great, so it was fun to hear theories in today's world alongside the fantasy historical world of the book I was reading.
Posted by Lisa Mandina at 7:00 AM

Email ThisBlogThis!Share to TwitterShare to FacebookShare to Pinterest
Labels: Alexander the Great, audiobook, Conspiracy of Us series, Eleanor Herman, Empire of Dust, Maggie Hall, Map of Fates, Napoleon, YA novel