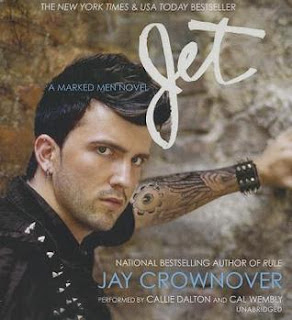 This was my next audiobook download from the library.  While I didn't love it as much as I loved Rule, I'm still really in love with this whole series, and getting even more excited to get to meet the author at the NOLA Story Con in September!  For the most part, all of my problems, which I'll list at the end, have to do with the narrators, and not the story itself.

One thing I love about this author, and a trend in books I'm growing to like quite a bit, is having both of the main characters narrating alternate chapters.  In this book we get half from Ayden's point of view, and half from Jet's point of view.  Ayden was Shaw's roommate in the first book, and this book is her story.  There was a point in the first book, when Shaw went home with Rule, but Ayden was very much interested in Jet, so she stayed and got a ride home with him.  We learn  more in this book about how Ayden had invited Jet back to her apartment on that night, but he'd turned her down, in what he thought was a nice way, he told her she was too good, too sweet, too pure for him.  Jet, like Rule and most of their friends, was pretty much a man-whore.  Which makes sense, I mean Jet is the lead singer of a band.  Now, it's a heavy metal band, which for me isn't a turn on, but I understand how it is for many other people.  And his picture on the book isn't bad, not to mention that he really is supposed to have a great voice, and anyone who has heard him sing other songs, wonders why in the world he doesn't do something different and become the huge star that he could be.

Ayden on the other hand, isn't the pure, innocent good girl that she comes across as in this book.  In her past life, before she came to Denver to go to college, she had a rough life. She grew up in a trailer home with a mom who was too busy with whatever guy she was in love with at the moment to take care of her or her older brother, Asa.  Asa was bad news himself.  He could sweet talk anyone into doing anything he wanted, not to mention that he was into lots of bad things. Drugs and other criminal activities.  When Ayden moved away from her home, Asa had been in jail.  So she was able to reinvent herself in Denver, where no one knew what her past had been.  She's attracted to Jet, but the part that is attracted to him reminds her too much of how she used to be, and she doesn't want that girl to come back out.

In the main part of the book, Ayden now lives in a house with Jet and Cora.  Every night Jet has a different girl come home with him. And every morning Cora and Ayden rate the girl as she walks out.  They base it on looks, how blown away by the sex she looks, and how cool and collected she might be, versus how mad and pissed off about being sent home she might be.

Of course it turns out that actually Jet is attracted to Ayden.  And everyone around them can see just how attracted to each other they are.  When Ayden decides that they should give in and just be friends with benefits, things start to change.  But Ayden is wary of falling in love or letting it get to be anything more.  She has goals, she is going to be a doctor, and is not going to end up like her mother, and Jet's "career" as a lead singer of a rock band, is not the kind of future she wants.  What she doesn't realize though, is that Jet is more than that.  He owns a studio where he helps other people record albums, and he will produce them.  Jet has his own problems in life though.  His father is not a good person, and treats Jet's mother like crap.  Yet she refuses to leave him, because she loves him.  So Jet won't go away on tour, because he is afraid what his father might do, follow through on threats he has made, if Jet is not there to protect his mother.

Things will not stay good between the two forever.  When Jet doesn't help his father get a spot going on tour with a band that is going to Europe, his father takes it out on his mother.  Jet goes to try to help, and before he can even get in the house, things go bad between him and his dad.  Then there is a disaster at the recording studio, right before Jet is thinking that maybe he should go on the European tour that he has been invited on. All of this comes to a head when Ayden's brother Asa shows up, and someone also tries to invade their house when Cora is home alone.

Ayden will pull back from Jet, partly because she knows he is not what she has envisioned for the change in her future, and partly because she is afraid what happened to Jet's studio is her brother's fault, and she doesn't want Asa to cause any more trouble.  In the end Ayden will have to learn to let others into her past, to ask for help when she needs it, and decide just what it is she really thinks her life will be that will also make her happy.  Jet will have to deal with his family issues, and figure out where he is going with the problems at the studio.

Again, I just loved this book, and am continuing to love this series.  There were great back stories, we got to know a lot more about Cora, which I'm sure is setting her up for the next book in the series.  Yay!!!  Which I can't wait for.  We met Asa, who I know is the main character in I think the last book in the series.  While I'm not a fan of Asa because of what he's done in this book, I'm sure the author will be able to bring me around with his story.

There's a part where Jet is describing the style of each of the guys at the tattoo shop, and I was left wishing that I could go to either Nash or Rowdy for the next tattoo that I want.  Preferably Rowdy, as it sounds like he is great about figuring out exactly what his customers want.  I'm also left missing the days when I hung out with a group of guys. There is just something different about hanging out with a bunch of guys, dating one or not, that is a totally different type of experience than when you hang out with a group of girls.  Don't get me wrong, I love my sorority sisters, but I miss the guys I spent about a year in college hanging out with all the time.

And as in the first book, the sex steams are as steamy as you could want, leaving you wanting what Ayden has just experienced with Jet.  At least they did for me. Although once again there was a piercing that I'm still not quite sure how I feel about a guy with that.  You'll have to read it for yourself and make your own mind up.

Next will be Cora and Rome's story.  Rome is Rule's brother who is in the  military.  I'm looking forward to his story, although the way he treated Shaw at the end of her book, and still seems to be treating her has made me a little upset with him.