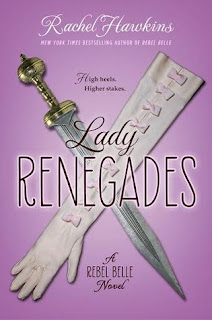 I listened to this last book in the series on audiobook, once again downloading it digitally for free from the public library, just like I did with the first two.  While I feel like it was a good ending, it kind of had the road trip feel that normally 2nd books in a series have.  And it was missing a vital part of the story that I think made the first two for me, and that was the interaction between Harper and David.  If you aren't to this part in the series yet, you can go back and check in based on where you are, so that I don't give away any spoilers in this review. The first book was Rebel Belle, and the 2nd was Miss Mayhem.

Where we had left off in the 2nd book, David had taken off, because he had help from Harper's friend Bee, and her ex-boyfriend - now Bee's boyfriend, Ryan.  They had helped keep Harper from going after him, because he had convinced them it was best for him to get away with his Oracle powers.  Only, Harper as a Paladin, is unable to protect him if he is not where she knows.  Not only that, but as David's powers get stronger, there is the fear that he may become as bad as the last male Oracle, who had done horrible things.  And it seems as if that may be starting when all of a sudden there are these new Paladins being made, young girls, that are trying to kill Harper, and Bee also.  And the longer that David is away, the more that Harper's Paladin powers seem to be fading.  So, along with one of their enemies from before, the girl that helped David to create more paladins, and also helped kidnap Bee, Harper and Bee set out on a road trip to try to find and save David before he goes off the deep end like the last male Oracle.

The search for David is an interesting one. We get bits of the story told from his point of view.  And we can tell how much his mind is being taken over, and how much he is fighting to not hurt Harper, who he still loves, as much as his slowly changing mind will allow.  When they do finally find David, Harper will face the one nightmare that David used to have, that she will have to decide whether to kill him or not.  For all that she feels she could never kill him, will it become a necessary evil in order to save the rest of the world?

The ending was sad, but actually had a very hopeful bit at the end.  I feel like I kind of knew what was coming for the very ending, even if the author almost did get me thinking that she wasn't going to go there.  So overall, even though I missed the Harper and David time, I am okay with this final book in the series, and the way it all ended.
Posted by Lisa Mandina at 4:36 PM