YA Review: Dream On (The Silver Trilogy #2) by Kerstin Gier 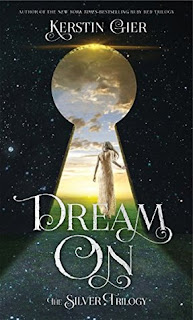 I have been a huge fan of this author, ever since I first read the first book in her other series, Ruby Red.  I loved the first book in this series, Dream a Little Dream, and when I emailed the publisher last year, they sent me an ARC of that title. This year even though I emailed and requested an ARC of Dream On, I never heard back.  So when I found someone had a copy to offer in the #booksfortrade deals, I jumped on it right away!  So now I have a matching set of ARCs for this series. One thing I love is how the book titles are song titles, ones that play in my head every time I think them.   And just like with the first book, I loved this one, the characters, and I can't wait to see what will happen next!  If you haven't read the first book, you should probably stop reading now, and go click on the link above to read my review of the first book. There will unfortunately have to be some spoilers for that first book.

Where we pick back up, Liv and Henry are still going into their dreams.  Partly to meet up with each other, and get to spend some alone time together, as they are now dating.  Grayson and the other members of the group that used to go into the dreams in the first book have all stopped, as far as they know anyway.  Anabel is in a mental institution, Arthur, her boyfriend, has had to move away due to what had gone down at the end of the last book.  Now, Liv isn't just going into the dreams to see Henry, when we first start reading, she's going into a guy named Charles' dream.  She's going in order to find out if he is interested or what he thinks about their nanny, Lottie.  She misses out on finding what he thinks when all of a sudden there is a dark, threatening, yet invisible presence somewhere that Liv can't find.  When she goes running for her own dream door, she runs into Henry.  He doesn't believe her at first, because he didn't feel it.  Soon there is a weird guy running around who says his name is Senator Tod Nord. Which they figure out means something else.  So not only are there weird things going on in the dream world, but then Liv's younger sister Mia starts sleepwalking, and acting funny.  Talking about a "fake" Liv.

Out in the real world, things are dramatic as well. There is always Mrs. Spencer, Ernest's - Liv's mother's boyfriend that they're living with, mother.  And she is often called the beast, until they finally give her the nickname of the Boker.  She is a horrible woman, and makes Liv, Mia, Lottie, and their mom's lives horrible at times.  When Mia and Liv come up with a way to get some revenge, with a little bit of vandalizing to something in Mrs. Spencer's front yard, well, let's just say that it kind of backfires.  In a way that even Grayson, one of the twins they live with, the one that is actually kind of friends with Mia and Liv, even he will be disappointed in them.  Not only is there the threatening presence in the dreams and in Mia's dreams, but when Liv follows Henry one night, she finds him in a room with a little bit older woman, naked, along with everyone else there.  And he won't tell her what is going on, other than to say it isn't what she thinks it is.  It's not just that, but also Henry is very private about his family, not really letting Liv come over and meet them.  And when the Tittle-Tattle Blog continues to run stories about Liv and Henry, making public secrets that make her even more insecure about their relationship.

So now Liv is having to worry about Mia's safety in the real world, Grayson being upset with her for real life stunts, Henry not being open and kind of breaking up with her, and then not knowing just what or who it is in their dreams now haunting them.

We get some wrap up at the end, this isn't a total cliffhanger at all.  But there is enough left that I am very ready for the next book, and can't believe I'm now waiting another year.  Hmm. Wonder if I can get the German version of the third book that has already been published, and get my sister to translate it for me.  :-)  I love these characters, Liv, and Henry, and Grayson.  I could sit and read their world forever.  Another great book from this author.  I have seen some people DNFing it due to less action. And I can see what they are saying.  It is in no way like the first book, in a way it may have a bit of the second book slump, but I love the characters so much, and there were still some really good bits of story in, and I was still very happy.
Posted by Lisa Mandina at 7:00 AM