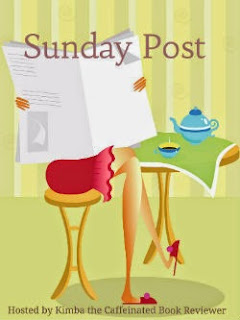 The Sunday Post is a weekly meme hosted  @ Caffeinated Book Reviewer. It’s a chance to share news ~ A post to recap the past week on your blog, showcase books and things we have received and share news about what is coming up on our blog for the week ahead. See rules here: Sunday Post Meme.  Let me tell you what.  The last week of school was so busy!  And then, this weekend was Planet Comic Con in Kansas City, and so my Friday night, and all of Saturday, was spent at that.  So I've got books to share from then, as well as some awesome pictures that I got with some movie stars! It was also a very busy week on my blog as well.

Last week on the blog:
If you remember I mentioned about all the free/cheap ebooks I'd been downloading and reading, basically speeding through.  Well, instead of stretching their reviews out over a long time, I just did very short reviews of all of them together in one big post.  I joined into Top 10 Tuesday for the first time in a long time!  I also signed up for another challenge, a comment one, and it will help me with my own goals for the year.  I got my two days of walking done, not to mention at Planet Comic Con on Saturday I walked all 10,000 steps as well!  As I said, school is out for the summer.  Yay!  I'm ready for being able to stay up late reading and not having to worry about getting up in the morning.  I'm ready to bump up my amount of walking for the week and try to keep losing more weight.  I'm still losing weight, slowly, but I'm happy with the way it's going, because I feel it is easier to keep it off when I'm losing it this slowly.

Now, let's talk about Comic Con this weekend.  Because this year was amazing!  First thing I did was wander through the hall while I waited for the Kevin Smith show to start at 8 pm.  So I got to see the Mary from Supernatural (Dean's car) replica and get my picture taken with it. 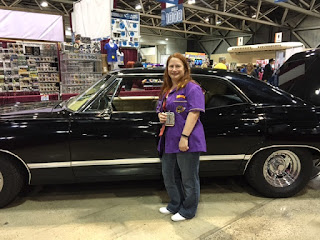 I have been a huge fan of Kevin Smith.  If you don't know who he is, he is responsible for the movies Clerks, Mallrats, Dogma, Jay and Silent Bob Strike Back, and Chasing Amy, just to name a few (and my favorites).  He also plays Silent Bob in those movies.  I have wanted to see him in person for so long.  But both times he's been here in Kansas City, I've not been able to see him, because of money or scheduling issues.  But when I found out he was coming to do his show the first night of Comic Con this year, I made sure to buy a ticket as soon as I could. And I bought a VIP ticket.  Which meant that I got a seat in the front rows, and a free autographed picture.  Unfortunately I didn't get to actually meet him.  So that kinda sucked.  But I keep my hopes up that some day I will get to!  He was hilarious!  First there was an issue that he had been in Nashville the day before, and his flight got cancelled.  So his only choice was to take a Southwest flight. And if you know much about Kevin Smith, you know that he has an issue with Southwest.  But, because he didn't want to let us down, he got on the flight and made it here, just about a half hour late.  Then he said the show would go till about 11, and he would understand if anyone needed to leave.  But actually, it wasn't over until almost midnight!  But it was totally worth it.  I never got tired or bored, and never even checked my phone to see what time it was.  If you are a fan, and ever get the chance to see Kevin Smith, it is totally worth every penny.  Here is a shot I took. The only problem that night was that he never came over to our side of the stage! 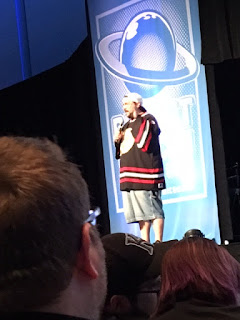 So that was my Friday night.  I also got to go see an author that I have reviewed her book, The Curse of Jacob Tracy, on Friday night.  Here I am with Holly Messinger.  I had to pick up the new short story book that goes with the series, The Romance of Certain Old Bones.  It is set 5 years before the first book. 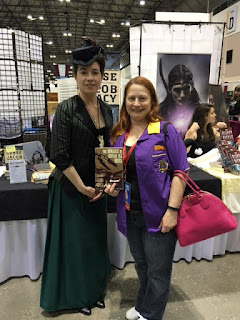 Then, Saturday.  Can I just say that Saturday was such a cool day?  Of course I bought too many books.  You'll see a picture of my haul from Comic Con below in my Stacking the Shelves portion of the post.  I wandered around for a bit.  But first I had to go back to the author booth next to Holly Messinger's booth, because there was a book there I'd seen on someone's blog, and so I had to buy it.  And I was lucky enough that the author was there as well!  The book is The Silver Sickle by Ellie Ann.  I guess she is really tall as you can see in this picture, but honestly I'm pretty short myself. 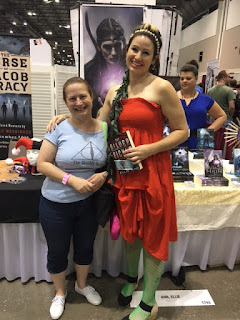 My next excitement for the day was to get in line to get to meet Jason Mewes. If you don't know who he is, he's been in every Kevin Smith movie, and he usually plays the character of Jay, who is always with Silent Bob.  I only paid for a physical print copy, so I had to take a picture of the picture for this.  He was doing all kinds of fun poses with everyone.  I saw him stand back to back with one guy, then he had the next girl jump up and put her legs around his waist.  The next guy he had stand behind him and act like, well, something inappropriate.  For my picture, I was wearing the Mooby's uniform shirt that I wore for my Halloween costume.  So he kind of pointed to the Mooby's picture on my shirt.  Totally ignore my stupid, giddy fangirl smile! 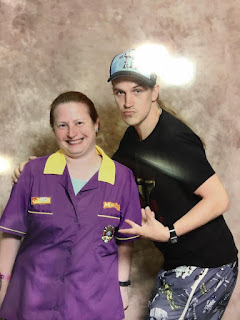 The pictures for that ran a little late, so I didn't get to the panel with Holly Messinger that I had hoped to.  Instead, I had seen the girls from The Hillywood Show on Youtube, Hilly and Hannah Hindi, were in a booth doing autographs and pictures!  Here they are dressed as Dean and Castiel. 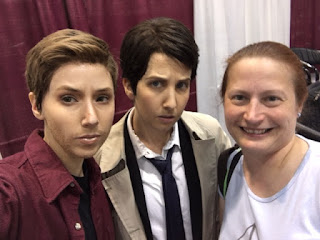 They had cool tshirts for sell that went along with the Supernatural Parody, so I had to buy one.  Here is a picture of it. 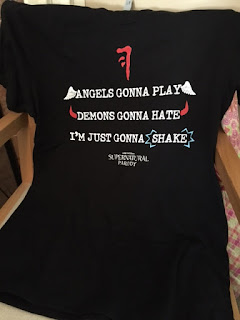 Not long after that was time for the Hillywood Show panel.  It was fun to get to see the girls talk, and they showed us three of their videos.  I'd seen two of them, the Supernatural one and The Walking Dead one. The third one was for Doctor Who, which I don't watch. But it was still fun to see!  Hannah and Hilly are just tiny!  They are about my height, a little shorter I think even!  But here they are up on stage answering fan questions. 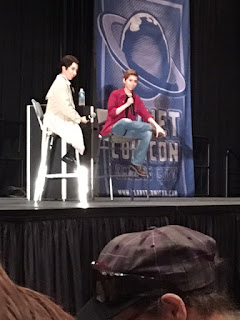 After the panel I went to get some lunch.  I wandered around the show again for awhile.  Then I went to a panel with with some horror authors, one that I specifically wanted to see, Dan Wells.  They talked about what horror is, as well as about writing and publishing.  I got some great writing tips that work for any genre.  So that was great.  Then I went back to the booth and bought some books and got my picture taken with Dan Wells. 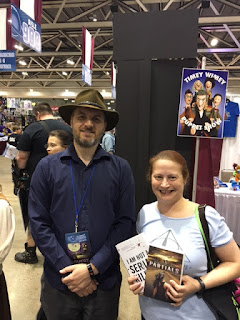 And then.  Then came the highlight of the show.  The reason that I stayed all day, even though I'd arrived at 10 am that morning.  I had a photo scheduled at 5:30 with, drumroll, Tom Felton, otherwise known as the actor who played Draco Malfoy in the Harry Potter films.  And he was sooooo  nice!  When I went over to him, he said "Hi, darling!" and put his arm around me for the picture.  Now, he did call the girl in front of me, sweetheart, but still.  So darn sweet!  I was totally swooning and fangirling with the girls in front and behind me when we went to pick up our pictures afterwards.  Here we are.  I could stare at this picture all night. Again, I didn't pay for the digital version, so I had to take a picture of the actual picture to post it, as you can tell from my finger holding it on the side.  I think I'm going to bring the picture up to my bedroom to stare at as I fall asleep.  :-)  Once again, ignore my total geeky smile!  I get so excited my smile just won't stop! 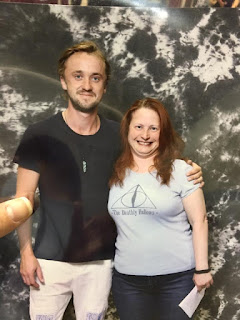 So that was my awesome weekend. Saturday was exhausting, from walking and standing in line for sure.  But also from all the excitement of meeting the awesome people I got to meet!

This week on the blog: 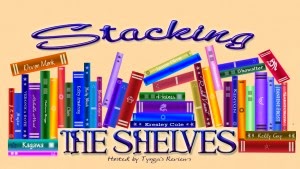 Stacking the Shelves is hosted by Tynga's Reviews.  Once again I had a bad week with the ebooks.  Not to mention buying too many books at Comic Con.  And egalleys, although to be fair, they were all from Edelweiss which means I don't download them until closer to the time I'm going to actually read them.
Physical Books: 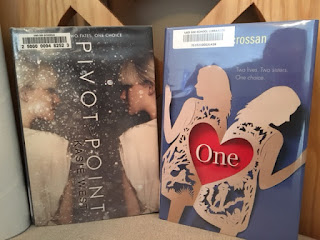 I checked these two out from the school library where I work.  I decided they sounded good and I'd try to read them over the summer. 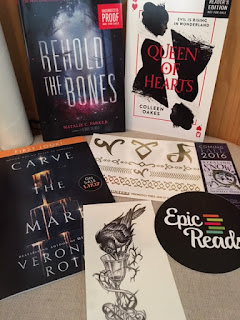 The two books at the top of the picture I got from a Books for Trade group on Facebook.  The swag in the front came with one of them! 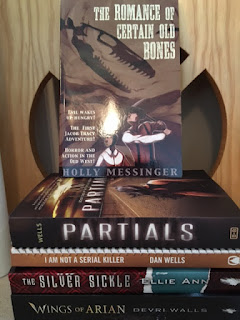 The top one is the short story book by Holly Messinger that I told you about above.  Then there are two by Dan Wells:  Partials and I Am Not A Serial Killer.  The first one was planned, the second one I decided on after hearing him talk about it in the panel.  Next is The Silver Sickle by Ellie Ann, who I have a picture with above.  The last book, Wings of Arian is by Devri Walls.  I met her at Comic Con at the booth where Ellie Ann was.  I  met her Friday night, and decided on Saturday to go back and buy her book as well, I forgot to get my picture with her though.  It sounds good, although I'm not usually that type of a fantasy reader, so we'll see!

I got a stripped cover copy of this from the bookstore where I work.  I still probably want an actual good condition copy, but for now at least I have it available to read.