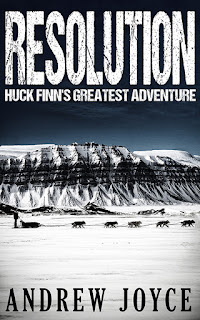 It is 1896 in the Yukon Territory, Canada. The largest gold strike in the annals of human history has just been made; however, word of the discovery will not reach the outside world for another year.
By happenstance, a fifty-nine-year-old Huck Finn and his lady friend, Molly Lee, are on hand, but they are not interested in gold. They have come to that neck of the woods seeking adventure.
Someone should have warned them, “Be careful what you wish for.”
When disaster strikes, they volunteer to save the day by making an arduous six hundred mile journey by dog sled in the depths of a Yukon winter. They race against time, nature, and man. With the temperature hovering around seventy degrees below zero, they must fight every day if they are to live to see the next.
On the frozen trail, they are put upon by murderers, hungry wolves, and hostile Indians, but those adversaries have nothing over the weather. At seventy below, your spit freezes a foot from your face. Your cheeks burn—your skin turns purple and black as it dies from the cold. You are in constant danger of losing fingers and toes to frostbite.
It is into this world that Huck and Molly race.
They cannot stop. They cannot turn back. They can only go on. Lives hang in the balance—including theirs.


My name is Andrew Joyce and I write books for a living. Lisa has been kind enough to allow me a little space on her blog to promote my new novel RESOLUTION: Huck Finn’s Greatest Adventure. I think it’s a good book, but what do I know? Anyway, I’m kinda shy about tooting my own horn. So I think I’ll turn things over to my dog Danny—Danny the Dog—to toot it for me. He always has an attitude and usually does not speak highly of me. But please understand that we co-exist as the old Soviet Union and the United States once co-existed. We tolerate each other. So without further ado, here’s Danny. 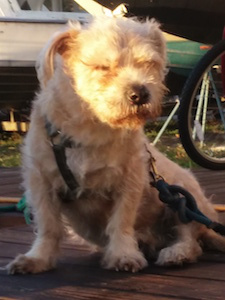 Andrew took me away from one of my most pleasurable pursuits—barking at ducks—to help him out here. For a person who works with words for a living, he has very little to say in real life. He wants me to tout his book for him, but I don’t think I will—I’m not too happy with Andrew at the moment. My name is Danny. To my legions of fans, I am known as Danny the Dog.
Today I am going to talk about Andrew, but not in the way he thinks. He’s a real idiot! He wants a Viking funeral. Do you know what a Viking funeral consists of? I didn’t think so, and neither did I until Andrew opened his big yap!
When a Viking died, they put him on his boat, set it afire and pushed it out into the fjord. Oh . . . and one more thing, they killed his dog and laid him at the feet of the dead Viking just so the guy could have his dog with him in Valhalla!
I mean . . . what the hell? What had the poor pooch done to warrant a death sentence?
I had a talk with Andrew last night and told him that if I went first into the “good night,” then I too want a Viking funeral. His buddies should kill him and put him at my feet before they set the boat ablaze.
And guess what? Big surprise, he didn’t think that was such a good idea. So we agreed to just have a simple non-denominational service regardless of who goes first. But if he keeps up with this Viking funeral stuff, it will probably be him . . . in fact, I’ll make sure of it.

That’s about it for now. Oh yeah, I almost forgot—go out and buy Andrew’s new book and make the old guy happy while he’s still extant on the physical plane.
This is Andrew again. On behalf of Danny and myself, I would like to thank Lisa for having us over. It’s been a real pleasure. 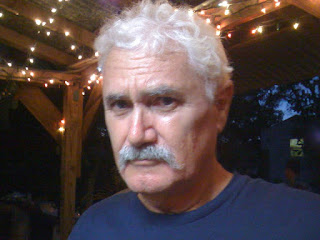 Andrew Joyce left high school at seventeen to hitchhike throughout the US, Canada, and Mexico. He wouldn’t return from his journey until decades later when he decided to become a writer. Joyce has written four books, including a two-volume collection of one hundred and forty short stories comprised of his hitching adventures called BEDTIME STORIES FOR GROWN-UPS (as yet unpublished), and his latest novel, RESOLUTION. He now lives aboard a boat in Fort Lauderdale, Florida, with his dog, Danny, where he is busy working on his next book, YELLOW HAIR.