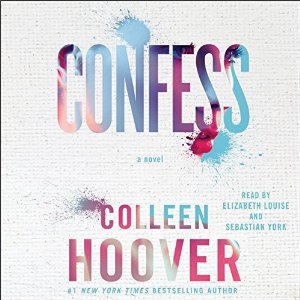 This was my next audiobook that I checked out from the library. Ever since I first listened to November 9, I have become a huge fan of Colleen Hoover.  And this book didn't disappoint.

There are two main characters that the story is told by in alternating chapters.  First is Auburn, and when we first meet her she is young, and visiting her dying boyfriend in the hospital.  Then in Chapter 1, she is in a meeting with a lawyer, and trying to figure out how she can come up with the money to do what she wants.  We aren't told what she has asked him to do, and we don't find out for quite a while actually.  She has just moved to Texas.  On her way home from the lawyer's office, she notices a help wanted sign in the window of a building that is covered with people's confessions.  As she stands there reading some of them, and wondering what the job might possibly entail, the door opens, and we meet Owen.

Owen is an artist, and he uses the confessions that people leave at his studio to create paintings.  He is getting ready to have his monthly show that very evening, and he needs someone to help him work it.  You see, it had been his girlfriend, who just broke up with him. So he needs someone right away.  He convinces Auburn to stay and work, since he is paying $200 for one night's work, she can't very well say no to that.

But somehow it seems that Owen knows Auburn from before.  We know that it has something to do with when she was in Texas visiting her boyfriend.  But it takes a while before it comes out exactly where and how he knows her.  This first night, working the art show, something between them seems to click.  For both of them. And Owen walks Auburn home after taking her to the bar across the street for a late dinner after the show.  The scene at Auburn's apartment is really cute.  Especially the part where he doesn't seem to want to leave, even once the door is almost closed.  They set a date for the following evening.  But it turns out that something happens, and Owen never shows.  They didn't exchange phone numbers, so she has no way to even call him after she is stood up in the restaurant.

It turns out that Owen was arrested for drugs.  Something that when Auburn finds out, about a month later, it really changes whether she can be around him.  It doesn't change the connection she feels, but it is a problem for what she is wanting to do with her life.  There is another guy in her life, Trey, and he is the brother of her boyfriend that passed away when she was younger.  He is a policeman, and he seems to be interested in Auburn.  She has never really felt that way about him.  I mean, he's the brother of who she loved!  But with all the issues that Owen has that could mess up Auburn's plans, she decides that she has to let Trey in, and give a relationship with him a try.  Not only does Auburn's roommate not like Trey, Owen warns her about Trey.

Such an emotional story.  The reason why Owen had the drugs is not what it seems, it is not such a bad thing, and actually shows what a great caring guy he is.  The reason for Auburn going to a lawyer is so heartbreaking and you are just rooting for her so much!  And then, the end, what Trey does, it's just wow.  A very intense ending, but another happy one.

Colleen Hoover is a great writer, and I look forward to reading more and more of her books.  And hopefully one day I can meet her.
Posted by Lisa Mandina at 7:00 AM