Review: His Kind of Trouble (Beauty and the Brit #2) by Terri L. Austin 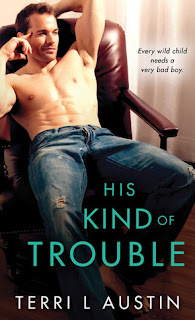 This is an adult romance, and one that I first learned about when we had the author come to our store to sign her books.  About a month ago I decided that the book synopsis sounded interesting, so I went ahead and bought it in the mass market paperback.  Unfortunately I'm not sure the rest of the series comes in that size, so I'll have to buy the trade paper size, which is usually about $7-10 more.  Also, I didn't realize this was the second in the series, not that you have to read them in order necessarily.  But I will want to go back and read the first one, because one of the characters in this book is the main woman in the first one, and since I don't like her very much in this one, it might help to get her side of the story.  This was a good story.  Quick and easy to read!  And like I said, I am going to try to read the others at some point.

In this book the main characters are Monica and Cal.  When we meet them, Monica is a pretty wild college aged girl, at her father's wedding.  She and her sister lost their mother, and so it is hard for her to see her father move on.  Part of her wild-child personality catches a hot guy who walks into the church, wearing a leather jacket, and not at all dressed for a wedding.  When she hears him speak with a British accent, she decides to get him alone out in the garden behind her sister's house.  This guy is Cal, and he actually is pretty much into this.  But then, Monica's sister walks out and catches them and makes Monica go in.

When we get back into the story, it is five years later.  Monica has changed quite a bit.  She is very straight-laced and proper.  She works with her sister at a charity they founded in honor of their mother.  She dates a nice guy, and doesn't do the crazy things anymore.  But then when she goes over to her sister's house for a meeting about the charity, Cal is outside the house working on a car.  Turns out that Cal is her sister's brother in law.  And he remembers Monica and what almost happened between them.  He wants to pick right up where they left off, but she refuses.  She doesn't want him to take her back to her old ways, even being around him for the short time in their first meeting in five years makes her want to forget all that she's done to change.  During the years between when they last saw each other, something had happened to her that had scared her enough to send her on the opposite path of where she had been heading.

But Cal refuses to let her go.  His plan is to show her that she can still have some of what she enjoyed back then, with him especially, without having to give up her good life. But he can also see that her changes have really made her a different person, and that she doesn't seem to be any happier this way, in fact she seems very unhappy to him.  Several encounters get things going between them again, and even though Monica doesn't want to get serious, knowing that Cal will continue to move from place to place as he always has in the past, breaking her heart and sending her back where she doesn't want to go.  Cal isn't sure where it is going, but he knows that he wants to be with Monica, and he will do what he can to keep her.  He also has something that happened to him in the past five years that has shaped how he behaves and what he will do with the rest of his life.

The sex scenes are steamy and fun.  It's a pretty quick read, with some emotional bits, and definitely a good story.  I look forward to going back to read the older sister's story, as well as going on to the next book, which I think is about Cal's younger sister.
Posted by Lisa Mandina at 7:00 AM