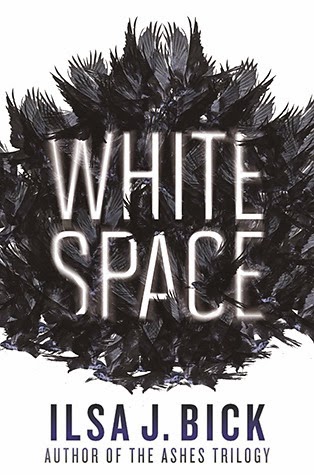 Originally I had received an egalley of this from Egmont USA Publishing and Edelweiss, but was unable to finish reading it.  I left a short review of how far I got HERE.  I got an ARC of it, I believe through trading on YA Book Exchange, and I picked it back up just recently so I could be prepared to read the egalley of the sequel, The Dickens Mirror.  And now that Egmont will be closing their USA publishing, I am also participating in a tour to promote the authors that are being left off, one of them being this sequel.

At first it took me a bit to get back into it. What I remembered was a bunch of teens who had been stuck in a blizzard.  But then it wasn't just a blizzard, a strange fog showed up, and really crazy monsters, as I said in my original semi-review, Lovecraftian monsters.  And it seems all of it kind of stems back to a certain author, and how he used something called the Dickens Mirror in order to create his characters, but it also pulled through these monsters that are now coming through.  It turns out that all of the characters may just be written in books.  Even one, Emma, who it seems has been writing books herself.  There are all kinds of dimensions, and twists and turns, and there are some really major science terms and theories talked about, including Schrodinger's Cat, and another one I had to look up, and even after looking up I'm still not sure I understand it completely.  But then physics has always been my least favorite science area, I prefer Biology and Geology.  But I did really like the science stuff thrown in.

It's really hard to explain this book.  I feel like you have to read it for yourself.  It's definitely not anything that would ever be termed an "easy" read.  It is a good one, like I said, the monsters are very scary and the scenes are very exciting and action packed at times.  Definitely could make a very intellectual horror movie from it.  I did get back into it when I was about 100 pages after where I left off, and by the end I was really liking all the twists and turns.  Until the very end.  Once again I was kind of confused, although I understand there was an "infection" that was supposedly causing the changes that confused me, I still am not quite sure if what I finally thought I'd figured out is true or not.  So I'll be eager to pick up the sequel in a week or so, I'll be posting a review of it as part of the blog tour on Monday, March 2nd.

Not sure if this is a very good review.  Like I said, I'm really unsure how to explain it.  It's characters from different stories brought together to try to help the author's daughter get rid of the bad things/fog that is starting to leak into the real world, maybe.  Lots of good characters, with back stories that are almost all really well developed, and you learn eve more about them at the end.

If you like the author, you will probably want to give it a try, just be prepared to have to actually take the time to read and think as you read, so that you don't get too confused.
Posted by Lisa Mandina at 8:00 AM