So I guess I'm glad my sister in NYC ran out of things to read and called or texted and asked me for some ideas of books to get, because she bought Austenland and so I got to read her copy and loved it!  I'd wanted to read it for awhile.  Especially since I saw the ads for the movie.

After having read the book, I would say that the part of Miss Charming must have been written with actress Jennifer Coolidge in mind, because she fits exactly what the character is in the book, based on seeing her in other shows, not to mention her looks.  I'm not sure that Keri Russell fits my image of the main character Jane.  According to the book I imagine someone not skinny or with no figure, which to me is Keri Russell.  The guys can look like however, I'm good with that. 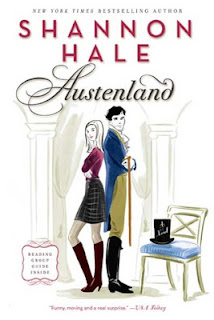 So basically the story is about Jane Hayes who is obsessed with Jane Austen stories, Pride and Prejudice especially.  She is looking for her own Mr. Darcy.  A very old great aunt sees Jane's obsession and when she dies, she leaves something for Jane in her will.  What it turns out to be is a trip to Austenland.  Austenland is a theme park?  More like a resort, in England of course.  Where women can go and have their own Austen story experience.  And it is an experience!  You have to wear the clothing, you have to give up your modern day technology, etc.  And you have to act according to the rules, which includes how you talk to others, including the opposite sex.  Jane arrives and finds that she is not the normal kind of client.  Normally they are rich women who are there, and will return.  The lady in charge, Mrs. Wattlesbrook, lets Jane know right away that she is not who they normally have, and that she is just looking for anything to kick her out for.  At first Jane finds it hard to get into the spirit.  The clothes aren't comfortable, and the men, eh.  There are enough for everyone at first, until Miss Heartwright shows up.  As nice as she is, now Jane ends up on her own.  Until, Captain East shows up.  It seems Captain East and Miss Heartwright must have a past.  And then soon Miss Charming begins complaining that she is not getting her money's worth, and soon Colonel Andrews begins to make a play for her.  Now early on in the trip, Jane notices one of the gardeners, Martin.  She is careful about going to his cabin/apartment in the "staff" ground area so that she won't get herself in trouble, or him.  But soon she realizes that he isn't real either, and decides to immerse herself in the experience.  Mr. Nobley is pretty much playing Mr. Darcy.  Now, Jane doesn't seem to see this, at least not to me, while it is so obvious that is exactly what his part is.  Soon, Mr. Nobley begins showing interest in Jane, and while it is exciting, Jane is sure it is all just part of the experience, and tries to keep herself from getting her hopes up.
The book is very good, humorous, romantic, etc.  While there are things Jane does that I'm like, STOP!  Give him a chance!  Don't be stupid!  I guess if you're in that type of situation and not sure what is real, I can see doing that.  Of course Jane has to sneak her cell phone in, and of course it almost gets her kicked out, except she is saved by Miss Heartwright unexpectedly.  The ending is pretty much what you'd expect.  Now, I will admit I've only ever read one Jane Austen story, Sense and Sensibility.  I chose to read that during my phase of reading classics instead of Pride and Prejudice, because I'd seen that movie.  I wasn't a fan of Sense and Sensibility, so I think I'll stick to the movies which will get me past the hard to read books themselves.  And that's okay.  Now, I'm really excited to see the movie!
Posted by Lisa Mandina at 9:16 PM