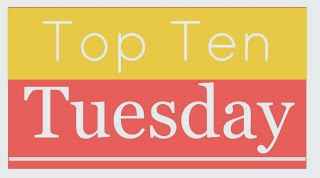 I haven't participated in this in a long time it seems. And actually, I'm joining into last week's post, but saved it for this week, just in case anything came up during June that would be added.  I wanted to do this after the first half of the year was officially over.  Now that we're in July, we are!  I decided to do two separate lists, one with adult romance, and one with YA books.  Now they're not in any particular order, just the top 10.  Some of the romance I'm grouping the books in the same series together.

So almost half of my favorite romances this year were rock star romance.  I definitely see a trend in my reading.  And the romance ones aren't all new books, whereas my YA choices are all ones that just came out this year.

Have you read any of these?  Would they make it on any of your favorite lists?
Posted by Lisa Mandina at 6:00 AM