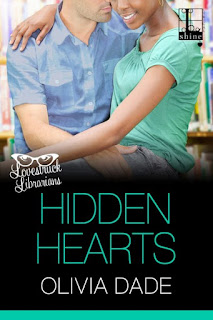 An Admirer With A Secret . . .
Mary Higgs could be the poster girl for the buttoned-up librarian. She follows the rules. Stays ʼtil closing. Her kindness and dedication to her patrons is legendary. But those patrons have no idea what she’s typing to the mysterious shut-in who emailed the library needing a library card three months ago . . .
When the elusive Miles O’Connor shows up, he’s no invalid. A year ago, he was the gleaming, ab-sational star of the small screen. Then came the accident. Now he’s a wounded recluse with a pizza habit and fears so unshakable that only the thought of losing Mary to an online date could lure him out of his cabin.
Soon their email rapport has turned into weekends on the couch, watching tearjerkers and driving each other insane with red-hot makeout sessions. But as the desire grows and their horizons expand, the life that brought them together might not be enough for either of them . . .

Hidden Hearts was my first introduction to the Lovestruck Librarians series, and even though it is the 6th book in the series, I'm very eager to go back and read the rest.  This is a series that can be read as standalones, but there are characters in it, couples, that I can't wait to go back and read their stories as well.  This is a very sweet romance with a tiny bit of sex in it, nothing too graphic, but not completely glossed over either.  I liked that both Mary and Miles basically had similar issues, or maybe it was more that they were somewhat similar in how they dealt with their issues.  I also like that the way they both were able to handle their disagreements seemed very realistic to me, not anything blown up to add drama.  As I mentioned earlier in this review, the supporting characters, many who are form past stories, are all wonderfully complex and totally add to the story.  This was a quick and easy read, when I picked it up, it was hard to put down. But it also was written well enough that when I went back after having to put it down, I very easily picked it back up and was able to join right back into the story.  I highly recommend the series and now I'm off to add the others to my Goodreads TBR. 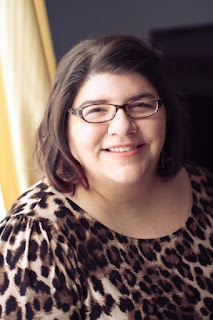 Olivia Dade grew up an undeniable—and proud—nerd, prone to ignoring the world around her as she read any book she could find. Her favorite stories, though, were always romances. As an adult, she earned an M.A. in American history and worked in a variety of jobs that required her to hide her bawdy interior under a demure exterior: Colonial Williamsburg interpreter, high school teacher, academic tutor, and (of course) librarian. Finally, though, she realized the call of the hussy could no longer be denied. So now she writes contemporary romantic comedy with plenty of sex, banter, and nerdery. When not writing, she cooks alongside her husband, dabbles in photography, and tries to hide her collection of throbbing-intensive romances from her curious daughter. Visit her on the web at oliviadade.com.