Blog Tour with Review: After by Anna Todd


After, the international bestselling contemporary romance from Anna Todd is available now!! 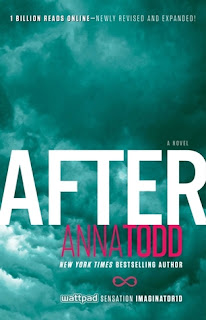 Tessa is a good girl with a sweet, reliable boyfriend back home. She’s got direction, ambition, and a mother who’s intent on keeping her that way.
But she’s barely moved into her freshman dorm when she runs into Hardin. With his tousled brown hair, cocky British accent, tattoos, and lip ring, Hardin is cute and different from what she’s used to.
But he’s also rude—to the point of cruelty, even. For all his attitude, Tessa should hate Hardin. And she does—until she finds herself alone with him in his room. Something about his dark mood grabs her, and when they kiss it ignites within her a passion she’s never known before.
He’ll call her beautiful, then insist he isn't the one for her and disappear again and again. Despite the reckless way he treats her, Tessa is compelled to dig deeper and find the real Hardin beneath all his lies. He pushes her away again and again, yet every time she pushes back, he only pulls her in deeper.
Tessa already has the perfect boyfriend. So why is she trying so hard to overcome her own hurt pride and Hardin’s prejudice about nice girls like her?
Unless…could this be love?
Anna Todd’s After fan-fiction racked up over 1 billion reads online and captivated readers across the globe. Experience the Internet’s most talked-about book for yourself!
There was the time before Tessa met Hardin, and then there’s everything AFTER ... Life will never be the same.

This book, this book, I just don't even know where to start!  I immediately connected to the main character, Tessa, as I started listening because she reminded me so much of myself when I started college.  Except for the way she dressed, I soooooo did not dress that bad.  Except for she had the obsessions with Toms and I had/still have an obsession with Keds.  But I was so naive, so innocent.  I also did not have a boyfriend like she did.  A lot of the things she did, said, ways she acted, were all things that I have either done, or could totally see myself doing.  As I read about Tessa and the other main character, Hardin, I found myself falling in love with him along with Tessa.  There were times when she was mad at him, and she would think about not going with him, but then she did.  I would be shouting in my car, "Don't do it!  Don't get in his car, slam the door and go back into the dorm!"  But later, when I got to thinking about it, I can see that I probably would have done the same as she did, being more worried about being rude to someone.  The sex scenes were very steamy.  The fact that this guy, kind of an asshole, (sorry about that language, but it's the truth), gave her the first sexual experience as him pleasing her, instead of demanding she do something for him, well at the time I wished for someone like that back when I was in college, instead of the first real boyfriend I ever had, my freshman year of college.  I know that their relationship is totally an emotionally abusive one, but you kind of were rooting them on, as Hardin seemed to try a little more each time she thought she couldn't take any more.  But then, the end, whoa.  You find out that the whole relationship started based on something so terrible.  I won't tell you though.  But, and while my bad experience in college was not the same as what happened to Tessa, it still brought back to me the feelings about what did happen to me, and I seriously, literally, physically felt the pain Tessa felt as it was all revealed to her.  What Tessa said to Hardin, it totally summed up how I feel about what happened to me:  "You took something from me that wasn't yours, Hardin.  That was meant for someone who loved me, loved me truthfully.  It was his, whoever he is, and you took that..."  I spent the rest of that night barely able to breathe, like there was a weight on my chest, like my heart had been ripped out of my chest. And the way it ended?  While the author is great as these kinds of cliffhangers as I found throughout the rest of the series, none of them compared to this one.  It was so sudden, ended with basically Tessa telling someone to "Tell me everything, every single detail."  That was it.  I tweeted to the author about this, and she retweeted me:

So, after I was able to recover a bit, a few hours later on Monday night, I picked up the sequel, and was glad to be dropped right back into the story so that I could get all the details along with Tessa.

Just so you know, if you start this, you'd better have book two, After We Collided,  handy and ready to pick up, because I'm guessing you'll be just like me!

I honestly loved this whole series so much that about a month after I finished reading all of them, I had to get a tattoo: 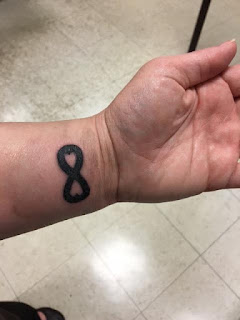 And then, I had to meet her, and so I volunteered to work at ApollyCon in Orlando back in March, then had to come up with the money for a plane ticket and a place to stay, but I did it, just so I could meet her.  Here is a picture of me with her, and then also a picture of the two of us with our semi-matching tattoos: 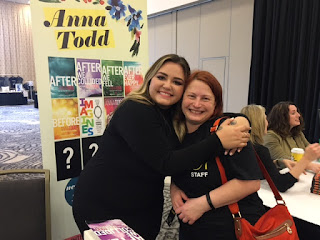 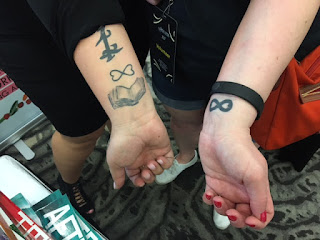 Seriously, get out and get your copy of this today!

Grab the Other Books in the Series! 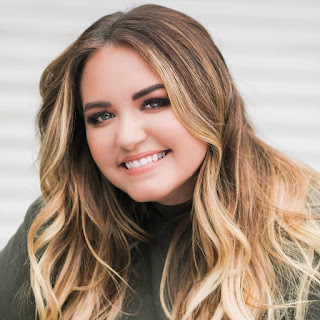 Anna Todd is the New York Times and #1 internationally bestselling author of the After series. Hailed by Cosmopolitan as “the biggest literary phenomenon of her generation,” Anna began her literary career on the social storytelling platform Wattpad. Serialized on Wattpad in 2013, After has over 1.5 billion reads on the site. The print edition, published in 2014 by Gallery Books, an imprint of Simon and Schuster, has over 15 million copies in circulation, has been published in over 30 languages and is a #1 bestseller in Italy, Germany, France and Spain. A native of Ohio, Anna was a voracious reader all her life, citing Pride and Prejudice, Wuthering Heights and Fifty Shades of Grey as some of her favorites. In 2012, after discovering the world of fanfiction for fandoms like Twilight, The Vampire Diaries, The Mortal Instruments, Anna began writing as a way of continuing the stories she so loved from the fan-fiction community.