Blog Tour: Excerpt with Giveaway - Amid Stars and Darkness by Chani Lynn Feener

Delaney’s entire world is thrown into chaos after she is mistaken for Lissa Olena, an alien princess hiding out on Earth in order to escape an arranged marriage.
Kidnapped by the princess’s head bodyguard, Ruckus, and imprisoned in an alien palace, Delaney is forced to impersonate the princess until Olena can be found. If she fails, it will lead to an alien war and the eventual enslavement of the entire human race.
No pressure or anything.
Factor in Trystan, the princess’s terrifying betrothed who is intent on unraveling all her secrets, and her own growing feelings for Ruckus, and Delaney is in way over her head.
Get lost Amid Stars and Darkness, in this YA sci-fi romance from debut author Chani Lynn Feener.

Goodreads / Amazon / Barnes and Noble / Kobo / iBooks
Excerpt:
Trystan frowned at her, dropping the hand he’d still had on her arm. “Do you care?”

Because Olena was a self-centered brat who wouldn’t, Delaney recalled too late.

“I’m just concerned we might not win now,” she said in a poor attempt to save face. “His clumsiness cost us.”

If anything, this only caused his frown to deepen.

“Did you develop a liking for sports while you were away as well then?” he wondered, and it was clear from his tone that she’d piqued his interest. Which was the exact opposite of what she was trying to accomplish.

“Right,” she drawled, “along with my newly acquired witty tongue.” Deliberately, she took a step back the way they’d come. “As great as this has been, Trystan, I’m afraid I must excuse myself.”

She was a bit surprised when he didn’t immediately try to stop her, yet he didn’t have too long to ponder over it. Hearing her name, she glanced toward the beginning of the course, squinting against the harsh glare of yellow sunlight. Weird, that the sky was a different color, but the sun and the ground were all the same.

“Olena.” Ruckus was quickly making his way toward her.

She took a step in his direction, about to call back, when suddenly an explosion rent the air. The blast came from behind, and she was knocked off her feet and tossed a good ways forward. The motion ended up bringing her closer to Ruckus, who was upon her in a matter of seconds.

Her head rang and her vision winked in and out. Disoriented, she clung to his wrists when he dropped to his knees and reached for her. An acrid smell filled the air, like burning rubber, and she managed to swivel her head around to see that the tree she’d been so close to had blown up.

The tree she’d been close to…but not close enough.

She gasped, and as if of their own accord, her eyes sought out Trystan.

He must have gotten on the ground right away. Aside from his hair being a little mussed up, it didn’t seem like he’d been affected by the blast at all. Their eyes met, and there was no denying the feral look in his icy blue gaze.

He’d tried to kill her.

The Zane, Olena’s—meaning her—fiancé, had just tried to kill her! 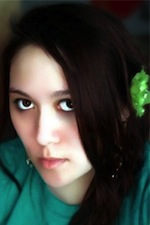 Chani Lynn Feener has wanted to be a writer since the age of ten during fifth grade story time. She majored in Creative Writing at Johnson State College in Vermont, and graduated in 2012. To pay her bills, she has worked many odd jobs, including, but not limited to, telemarketing, order picking in a warehouse, and filling ink cartridges. When she isn’t writing, she’s binging TV shows, drawing, or frequenting zoos/aquariums. Chani is the author of Amid Stars and Darkness and the teen paranormal series the Underworld Saga, originally written under the penname Tempest C. Avery. She currently resides in Connecticut, but lives on Goodreads.com.