Review with Author Interview: In 27 Days by Alison Gervais 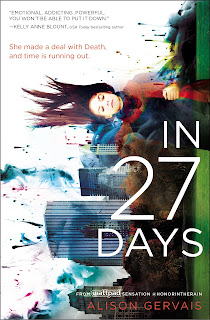 
Hadley Jamison receives an unexpected shock when she hears her classmate, Archer Morales, committed suicide. She didn’t know the quiet, reserved guy very well, but Hadley can’t shake the feeling that there was something she could have done to help him. Little does she know, she will actually have the chance. At Archer’s funeral, Hadley is approached by a man named Death who offers her a deal—if she accepts, she will be sent back twenty-seven days in time to prevent Archer from committing suicide.

Twenty-seven days was the length of time it took for Archer to decide to kill himself, and twenty-seven days is all Hadley has to succeed in saving him. Unfortunately, Archer isn’t exactly on the same page. Despite his cold comebacks and aloof exterior, Hadley knows he needs her, and continues to pursue a friendship with him. Archer begins softening up, and Hadley believes that her mission to save him will be a success.

But just when Hadley is beginning to feel confident, a series of dangerous accidents occur. She and Archer are pushed apart, and she must decide whether she is ready to risk everything—including her own life—to keep Archer safe.

In 27 Days is available in hardcover for $16.99 at retailers nationwide and online on July 25, 2017. An e-book edition is also available.

My review:
First, the main character's name is the same as my 5 year old niece's name, so that was interesting to read, as you don't see a lot of people named Hadley.  But I do love the name.  The story is told from Hadley's point of view, so we don't necessarily get to know exactly what is going on in Archer's mind, or exactly what might make him want to kill himself, except through the experiences that Hadley creates as she tries to get to know him and make him not want to commit suicide.  What I like about the story is that it doesn't all just go easy as they start hanging out and become friends and all is good.  No, Archer has reasons for not trusting other people.  Reasons for not letting Hadley just walk right in and get to know him.  But he has a great family, and they are very accepting of Hadley, and welcome her into their fold.  It turns out that Hadley may come from a wealthier family than Archer, but having money takes from the time she gets with her parents.  And it's not that they don't love her, I'm glad that even though she has absent parents, it is worked in to show that they do really love her, and that they can learn from things going on in their life and try to make things better.  I like all the twists the story took whenever we learned something new about either Archer, or Hadley, or even just what the deal with Death actually will entail and make Hadley have to deal with.

I only had two issues with the story.  One was how the two of them really didn't seem to know each other that much before all of this started.    But maybe that works better for the way the story is told.  The other issue I had maybe deals more with while the story is about a suicide being prevented, there isn't that much about the suicide itself.  Again, the way the story is told, that is probably for the best as well.  But don't go into the story expecting something like that.  For the most part you are getting the month before he will do it, just the repeat of it through Hadley's eyes.  Definitely a good read though.  One I can definitely see adding to my school library.

I don’t really know the complete story when I start writing – I just write. I think that’s why it takes me so long, honestly. I work in bits and pieces as new things for the story fall into my head. Sometimes I can get on this big writing streak and complete maybe seven chapters in two days, and other times I can go two weeks and only write two sentences.
This is going to sound so silly, but I have absolutely NO idea where the idea for IN 27 DAYS came from. I was just sitting on a plane, on my way home from a youth conference in Indianapolis, and all of a sudden I asked the person sitting next to me if I could have a pen and a piece of paper because I knew I just had to start writing something. That something turned out to be IN 27 DAYS. When I was writing the story, there were bits and pieces of certain scenes that were rather emotional for me. I’ve struggled with depression for years, and I think it always will be an ongoing battle for me. It was difficult not to feel for these characters as their story unfolded because I’d been in some similar situations before.
I started writing around the age of five, but it wasn’t until I was about ten or so that I began to consider becoming an author
My one piece of advice is ALWAYS keep writing! Never stop! Remember to write for yourself because you have a story to tell, and don’t worry about what people are going to think. Carry a notebook with you in case inspiration suddenly comes to you – like it did for me! – and then you can get down to writing as soon as possible!
About the Author: 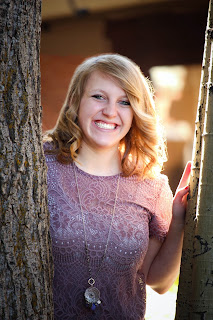 Alison Gervais joined the website for aspiring writers, Wattpad, her sophomore year of high school, and In 27 Days followed a few months later. In 27 Days has gone on to win a Watty Award, become the #1 title in the Adventure category, and secure nearly 20 million reads. Alison now attends the University of Colorado Pueblo pursuing a creative writing degree. If she's not writing or studying for classes, she can be found re-reading Harry Potter, watching Supernatural, or trying to win the affection of her two cats, Kovu and Rocket.