Not only have I been just crazy busy since ApollyCon last weekend, I didn't get ANY reviews posted last week!  You should see several coming up this week, especially as like 4 of them all are published on Tuesday, so I need to get them finished being read and then a review posted!  The three books I've chosen to review in this post are all pretty short, and all are related to the Kinky in Kansas City Convention I went to back at the beginning of March.  Two I purchased because the cover model was Jonny James, and the last one was in the basket I won in the raffle.  Only one of them did I really like that much. 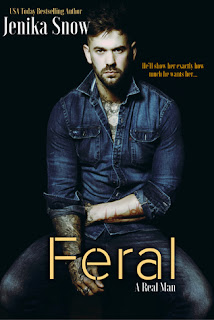 So, if you've followed me for a while, you know that I rarely rate a book 2 stars.  The reason being that if I dislike something that much, these days I'm probably not going to waste my time finishing it, in which case I don't feel it is fair to rate it.  However, this was a very short book, only 103 pages.  First of all, I have to say that the picture of Jonny on the cover totally doesn't fit the main character in the book, Dillon.  Second, the characters were not really that developed, making it hard to really get why they did some of the things they did.  Also, while the sex scenes were okay, some of it was a little out there, just a little bit too much in certain points.  I just read a post on Facebook where an author posted a survey asking whether her readers like books with no sex and a sweet story, or lots of sex and the story isn't as important. The latter is kind of what this book is.  But the sex, well, for me anyway, just wasn't really what I enjoyed reading.  (But look at that cover, it's worth owning just to look at Jonny.  And it's autographed now, so I'll be keeping it!)

Here's the blurb from Goodreads:

She’s about to find out exactly how much he wants her…LEXII’ve been fascinated with him for years.He’s wild and lives alone, and everyone has been smart enough to keep their distance.Except me, that is.Until now.I see something in him that I see in myself, and I want to explore that. He’s untamed and raw, and maybe dangerous.But that’s exactly what I need.It’s what I want.DILLONShe shouldn’t have come to me, but now that she’s here, I can’t let her go.I don’t do well around others, so going off the grid has been for the best.What Lexi doesn’t know is that I’ve noticed her for years and wanted her as mine for just as long. It would be safer if I kept her at a distance, which I’ve managed to do … but I can’t anymore.I won’t.I hope she’s ready to be mine, because she’s about to see exactly how feral I can be where it concerns her.Warning: This book is wild and dirty, short and smutty. Sure, it’s unbelievable, and features a celibate recluse who will make the woman he wants his at all costs, but who doesn’t like it that way? If you are into an over the top alpha hero, and some filthy goodness, dive in. 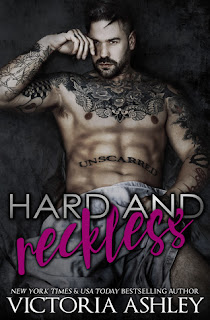 Of the three, this one I really did like.  I'm looking forward to reading more in the series as well.  And yeah, that cover, Jonny James is totally to die for on that cover.  I also met this author at Kinky in Kansas City, so this book has both her and Jonny's autographs.  I liked the guys, I liked the sex scenes, I really just enjoyed this one.  My only problem is something that is a very personal issue, and that was the smoking.  I am so anti-smoking, that I didn't enjoy those parts.  Otherwise it was a story that the characters were interesting and developed pretty well.  And as I said, I'm looking forward to reading on about them in other books in this series.

Cole King… the name alone leaves a bad taste in my mouth, a reminder of how he broke my trust in the worst way possible. My best friend of twenty fucking years. He had my back and I had his. Always. Until he crossed the line. Now visions of him sinking between my girl’s legs, making her scream in all the ways only I should’ve been doing, haunt me, mixed with images of all the ways I can rip his damn throat out. I’ve tried to forget it and move on, but I can’t. Ways to inflict even just a small portion of the pain he made me feel fucking consumes me. Somewhere in his fucked up, twisted mind, he thought it would be okay to share my girl. Now… Now, he gets to see what it feels like to share what is his. Brooke Collins… Hopefully she can handle both of us, because I intend to make Cole work for her. The hard part will be making sure she falls for the right one in the end. I don’t intend for that to be me… At least, not until I get a taste of her. That one touch alone is enough to change the fucking game.

Sin City Submission (The Doms of Genesis) by Jenna Jacob: 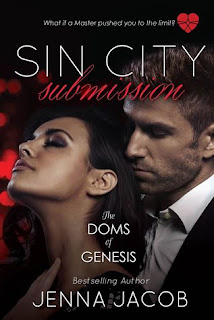 Okay, I really am not into all the BDSM stuff.  I'm definitely not into the whole dominant and submissive thing.  This book is really all about how the guy, Quinn, is teaching his submissive, Ava, that she is getting too used to things being one way, and not giving all her trust and submitting completely to his Dom ways.  Because I felt that way, I only truly gave it 2.5 stars, although on Goodreads, since you can't do half stars, I was nice and rounded up to 3 stars, because the writing wasn't bad, it was actually well written and the characters were well developed.  This one was really short, 87 pages.  It was in the gift basket I won in the raffle at Kinky in Kansas City.  I don't know that I'll read the other book in the basket, Embracing My Submission, because I don't know that I'd enjoy a full length story in this fashion.  I may do a giveaway with the two books this summer.

For Quinn MacKinnon, playing with Ava Gibbs’s body is easy. Playing with his beautiful submissive’s mind will take far more patience and creativity. Gambling their future, he plots to test her limits, relishing the opportunity to push her harder than ever.With one sexy dare after another, Quinn thrusts Ava into an extraordinary sensual journey. In a battle of wills, he wages a war for her heart. Can he persuade the strong-willed woman to surrender and become the submissive of his dreams?

So there are three quick mini-reviews.  Look for several YA reviews this coming week!
Posted by Lisa Mandina at 7:00 AM