It's all about business,
until temptation raises the stakes

NO RELATIONSHIP REQUIRED
Amelia James
Series: A Warning Labels Novel
Genre: Contemporary Romance
Publisher: Limitless Publishing
Publication Date: April 25, 2017
Add to Goodreads
No one knows Wyatt Ryder's secret, and no one ever will.
Fear rules his life, as he hides behind a golden boy facade of a high-rise penthouse, a weekend beach house, and all the starlets and models he could ever want or need.
But he's been used one too many times, and now casual sex is the only thing Wyatt wants, no relationship required.
What he didn't count on, however, was that one little complication called "mutual attraction" when an ambitious woman seeks out his help to take her ad agency to new heights.
But that's the thing about sexual tension and undeniable chemistry. It strikes unexpectedly, and it's almost impossible to ignore, even if you know that it will ultimately end in disaster.

Other Books by the Author

Don't miss the other books by Amelia James.

Prizes up for grabs:
$10 Amazon Gift Card
eBook copy of Keep Away From the Heat
Contest runs from April 26 - 30, 2017.
a Rafflecopter giveaway 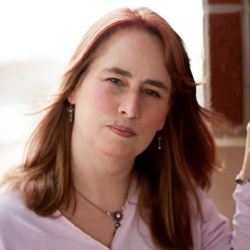 When I was in the third grade, my teacher wrote "tends to daydream" on my report card. What did she expect from a girl raised on fairy tales? I'm convinced those fanciful stories led to the romance novel addiction I acquired in junior high. My mom caught me reading a particularly hot one and took it away from me. She couldn't stop me from daydreaming though, and after I got married, I wrote some of my steamier daydreams down and sent them to Playgirl magazine. Two of them were published. I kept writing and eventually my short stories became romance novels.

I live in Colorado now, but I'll always be a loyal Wisconsin Cheesehead. When I'm not lusting after my next bad boy hero, I'm looking for inspiration in sci-fi and action movies, football players, morally ambiguous lawyers, muscle cars, and kick-butt chicks. Characters,the ever-present voices in my head, bring my books to life. They're my imaginary friends.
We all need to get away from reality for a little while. I prefer to escape with a sizzly, sexy, forever romance.