There's No Seven Year Itch Going On Here! Happy 7th Blogoversary To Me With a Giveaway For My Followers!!

Wow.  It's been 7 years, and I'm still here, and I'm still enjoying it!  Although, I'm feeling a bit busy lately, it's not making me want to stop.  I actually kind of feel like this might be my lucky year!  I've finally started getting more publishers getting in contact with me without me always contacting them first.  I'm also hoping that I get to meet more authors this year, as this past year the number of authors I met was pretty low.  I met some great ones for sure, just not as many as I would have liked!  Partly because there was no BEA for me this year.  Which I hope to change in 2017.  Plus, I'm going to the NOLA Story Con the first weekend in October, and there are all kinds of authors there for me to meet!  Now, if you were around last year, you probably saw my Blogoversary post contained a lot of GIFs.  And, I still love them.  In fact, whenever I see political posts on Facebook that I want to comment on so badly, but know that it will only lead to someone getting upset, I go post a funny GIF instead.  I'm going to use GIFs to talk about my past year in blogging.  After you scroll through all those, you'll reach my giveaway!

In past years I've joined challenges, but not kept up with them all year.  Especially when I would join more than one challenge at a time. This year I've done pretty well with that by doing my end of the month posts.

Now, this actually started before my last Blogoversary, but over the past year I've really started getting into audiobooks.  It wasn't something I ever thought I'd get into.  The few times I'd tried to listen to audiobooks in the past, I couldn't keep my brain from tuning out.  But I've since learned, it just takes the right book.  I've learned that books that contain tons of description, like a lot of fantasy types of stories, don't work for me on audio. But I've been listening to a lot of the authors that I am going to get to meet in October on audio, and love it!  Some of the books are so good that they make me cry, or get me hot and bothered. Which  might be okay in the car, but when I'm listening to them at the gym, let's just say that is a little embarrassing, whether anyone notices or not.  I've also gotten so addicted to some, that I don't want to stop listening, to the point where I have driven around the block several times so I don't have to stop in the garage and quit listening.  I listened to my current favorite story, After by Anna Todd, and was so into it that I had to sit and listen in my house to it, something that I have never done because usually I pick audiobooks for in the car or at the gym.

Speaking of the After series by Anna Todd, I became so obsessed with that series this year that I got my second tattoo, this one book related just like my first one. But this one was the infinity symbol from the cover of the books, and an tattoo that one of the main characters, Hardin,  has.  Here is a picture of it: 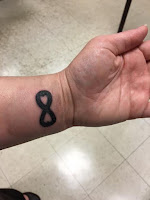 In case you didn't know, the first tattoo I got was the cover of Twilight, and I got that one years ago, almost 10 I think.

This past summer I also took a little personal writing retreat and stayed at a friend's condo in Fort Collins, Colorado.  It was very relaxing, and I got a little bit of writing done.  Wish I'd done more, but still pleased with what I did.  Hoping maybe to do this again next year!

I started my first year-long challenge, It's New to Me.  It was to help me get started on all those series that I kept saying I needed to start because everyone else loved them so much, like the Throne of Glass series.  I got started on that, just need to move on!  I also kind of added an aspect in letting people even just do "new to them" authors.

Okay, maybe that's enough of the GIFs for now.  On to the giveaway!  I've got two different things I'm giving away.  First is a mystery box of ARCs and finished books. Both NA and YA.  This prize will only be open to those who live in the US, because I'm kinda poor.  The other prize is open internationally.  It is your choice of book from The Book Depository up to $20.  So, help me celebrate, and enter the giveaway below!

a Rafflecopter giveaway
Posted by Lisa Mandina at 9:45 PM