Discussion Post: I'm Yes Then I'm No, I'm In Then I'm Out - Or the Beloved Books That I Just Couldn't Seem to Love

As always I didn't get around to my discussion post till the end of the month.  Partly because of how busy it has been with school getting started back up. And partly because I wasn't quite sure what I wanted to discuss.  Even now, my title isn't as good as I want it to be, but it was the best I could come up with at the moment, so hopefully it somewhat makes sense.  My discussion today is going to be about the books that either everyone seems to love and I tried, but just can't get into or don't quite get the fuss.   Of course I am going to throw in some GIFs because it is just so much fun to find them!

A reminder that the 2016 Discussion Challenge is hosted by Feed Your Fiction Addiction and It Starts at Midnight.  If you want to check out any of my earlier posts you can go to these links:

So, my title refers to the Katy Perry song, Hot n Cold, but of course my favorite use of the song is in the Twilight parody by the Hillywood Show, which was also my first introduction to the YouTube sensation.  But what I'm going for with this post is all the books that everyone else is so "hot" for, and they just left me "cold" or at least "lukewarm".

The first one is a series, and I want to duck here, because I'm afraid a lot of you are going to be throwing things at me through the internets.  I am on the 2nd book in the Lunar Chronicles by Marissa Meyer, and I am just not feeling it. 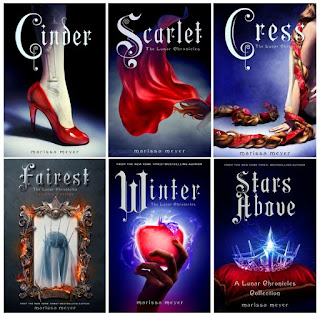 The first book, Cinder, was more interesting to me than this 2nd one, Scarlet, has been so far.  Even then, when I finished Cinder, I was still left a little bit unsure of what all the fuss was about.  It was okay, but nothing that I was now obsessed over.  But, I was able to get a copy of Scarlet for $4 at a Scholastic Warehouse book sale, and then I won the next three books in the series through a couple different giveaways.  I had heard from many people that book 2 was better than book 1, so I assumed by winning all those books that was a sign I was going to go on and be swept away once I started Scarlet.  Umm, no, it's not happening.  I started the book on August 6th, and since then I've read 4 other physical books, and that's not counting the ebooks I've read.  I usually keep a physical book up on my nightstand so that I will read that right before bed instead of staring at a screen, because I feel like it is probably better for my sleep.  But Scarlet has just not kept me reading.  I can't decide whether to push on through, or give up and then maybe just sell/trade all my copies of the books in the series as a big set.

Next is the Heroes of Olympus series and The Kane Chronicles by Rick Riordan.  Now see, I loved the Percy Jackson series.

But I had so much trouble keeping the characters straight in The Red Pyramid as each chapter went back and forth between them.  Which sucked, because I love Egyptian mythology and was so excited for that series.

And then, when I struggled through The Lost Hero, all I could think was how many more words were used than were needed.  I looked at the size of the book, and thought about how if they'd left all those extra things out, it would have been probably the same length as the books in the Percy Jackson series, and still just as good as those.  Because of that I have not made myself read on, dreading the amount of time and extra stuff to skip over as I try to get to the main story.

The last books I'm going to talk about that didn't blow me away are the Infernal Devices series by Cassandra Clare. 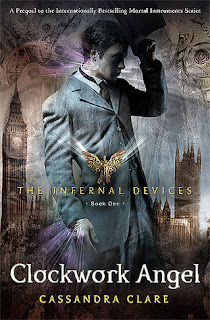 I actually love the Mortal Instruments series.  And I love Magnus Bane!  But I tried picking up and reading the first one in the series, Clockwork Angel, and just couldn't get into it.  I think it was actually one of my very first ever Books for Trade deals too!  So I have the copy sitting at home.  I don't know that I want to give up though.  I feel like maybe now sometime I might go back and try it again.  Just don't know when.

So, are any of these books one that you loved?  Do you have any books like this that you don't like but everyone else does?  I'd love to hear your thoughts, so please chime in below!
Posted by Lisa Mandina at 2:03 PM