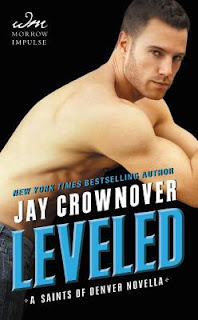 Okay, I have to admit that is my first romance between two men novel.  I've read stories with gay characters before.  But most of the time they were side characters, or it was not this type of a romance.  What I mean about "this type" of romance is a story with the sex scenes included, not just the romance.  No, it is not my usual read, but it is by a current favorite author of mine.  And, the characters are ones that I knew from other books in her other series, and they were characters that I had gotten to know enough that I wanted them to have their own happy endings.  And WARNING!!!! I might have a spoiler or two for some of the books in the Marked Men series in this review.  Starting with the very first paragraph!

As with all of Crownover's books, we get both sides of the story with alternating chapters.  First we have Orlando.  We met Lando back in the very first book in the Marked Men series, Rule.  Lando was Rule's twin brother Remy's boyfriend.   Remy's boyfriend that no one except for Shaw, his best friend at the time, now Rule's wife, knew about.  Lando has had a hard time trying to move on to another serious relationship after losing Remy.  Since Remy died in a car wreck the same night the two of them had an argument, Lando has always felt kind of guilty about it.  Lando is a physical therapist who helps athletes, military vets, and other big cases.

Dominic is our love interest.  Dom was Royal's partner. Royal is who we really got to meet in the book I reviewed earlier this week, Asa.  If you read that book, you know that Dom was injured in a police incident, so bad that he needed major therapy if he was going to be able to get back to work on the force.  Dom has always been a cop, always wanted to be to take after his father, who died in the line of work as a police officer.  He meets Lando when he goes for physical therapy.  Of course the two of them are attracted to each other.  But both have their own issues that keep them apart.

After losing Remy the way he did, Lando doesn't want to fall in love with Dom, because Dom's job is dangerous, and he could also die, and Lando doesn't know if he can handle another loss like that.  When the two of them give into the attraction, it is Dom's insistence on getting back into his police work that keeps the rift between them.  In the end, both of them have to decide if the other one is worth overcoming their past fears and hold ups.

It was definitely a romance, even with it being between two guys.  But of course there were things that were weird for me as a heterosexual female.  Just the thought processes to start with.  Also, I definitely learned about the actual sex between two men.  Things that I didn't realize.  I have friends who are gay men, but obviously I don't ask them or talk about their sex life in detail.  So I always just assumed sex for two men consisted of about one position, and then maybe oral sex?  If you don't want to or are uncomfortable reading about sex that isn't your norm, this is not the book for you.  Although I guess you could skip those parts when it gets into the detail and move on, and still get to enjoy the romance of the story.

A good story, not sure if I'll read a lot more of gay romance like this, but I did find it very informative, and it didn't bother me at all, just opened my mind to some things I'd not thought about.
Posted by Lisa Mandina at 7:00 AM