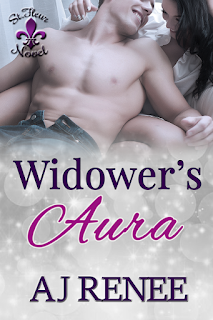 Synopsis
Living in a world full of colors, Sofia Brazier escapes a career gone south as a juvenile probationary officer in New Orleans. After moving to the small town of St. Fleur, Sofia opens a photography business in hopes of ridding her life of all the dark auras surrounding the damaged souls she once tried helping. Her comfortable new life is upended when widower, and ex-security-forces-turned-handyman hunk, Noah Tyler enters the local pub. Noah attempts to avoid the voluptuous beauty who has captivated his every thought. That is, until his daughter vandalizes Sofia’s building and effectively seals their fate. After cutting his daughter a break, Sofia begins tearing down the walls he built after his wife’s death. Just when life finally seems worth living for Noah, Sofia finds herself the victim of a string of crimes. Can he protect Sofia when he failed to protect his own wife?

Excerpt
His eyes locked onto Sofia’s. Noah tried swallowing but failed. His mouth, which had been fine a moment ago, now lacked even a drop of saliva. The woman was phenomenal. Her hair swept away from her made-up face in a twist, left her long neck exposed. The dress hugged her body and made his hands itch to run up and down those glorious curves. Oh man, her breasts… those breasts were magnificent. If the woman looked this good in clothes, he could only imagine what she looked like out of them. Not that he hadn’t imagined that a hundred times by now. Thankfully the jeans and T-shirt were enough to cover up the proof of his growing desire. He forced his eyes to Lindsey, who also looked beautiful and happened to be giving him a laughing smile. Noah cleared his throat. “Ladies, you look wonderful.” “Thank you,” they told Noah in echo. “Okay, picture time!” Sofia said. Sofia accepted the camera from his hands. Their fingers briefly touched, shooting a bolt of pleasure down to his groin. His eyes shot to hers as she took a deep breath. Taking a step back, she lifted the camera to her face. Noah watched her relax, all distractions disappearing on the other side of the lens. He’d never seen her work and witnessing it was a gift as she captured Lexi’s special day.

AJ Renee loves to travel and see family and friends whenever she gets a chance. She has a love of music, movies, and anything that can make her laugh. AJ believes in reading books with humor and mystery that end in a happily ever after to help ease our minds and hearts of life’s daily struggles. She currently resides in Nevada and spends her time with her air force husband, three young daughters, dog, and cat.