Review: World After (Penryn and the End of Days #2) by Susan Ee (TBR Challenge #6) 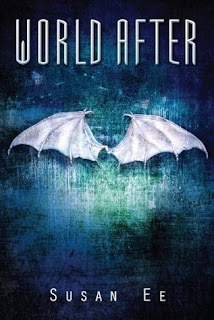 I won a copy of this book a year or so ago, and just finally got around to it because I accidentally signed up for an egalley on Netgalley when I forgot I had it on my shelf.  As so often happens when I wait so long to read a book that is a sequel to a book that I loved (in this case, the first one was Angelfall, and I got it the first year I went to BEA, 2012), I was mad at myself for waiting to pick up the story and find out what happened next. Because I loved it.  I loved the originality of the angels in this story.  When we finally get back to Raffe, I loved the dynamic between him and Penryn.  If you haven't read the first book in the series, I can't promise no spoilers in this review unfortunately.

We start back and Penryn is back with her mom and her younger sister.  Her younger sister who has been changed thanks to whatever experiments the angels were doing that created the horrible scorpion creatures.  And now her sister Paige has scars on her face where they changed her.  And she doesn't seem to want to eat anything but meat.  And even that doesn't quite work for her.  But she still knows her mother and sister, and will do anything to protect them.  And not only does she have the scary physical improvements, she has great strength now.  But when the other humans turn on Paige and try to destroy her, Penryn tries to help her escape.  It is only with the help of the scorpion creatures that show up that she does get away.  All the people who are stung seem to be dead, just as Penryn had seemed until she came out of the venom.  But the other humans don't trust that and so throw all the paralyzed, dead seeming humans into a pile and get ready to bury them.  Penryn and her mother run off to find Paige.  In their escape they wind up getting caught by the angels. And soon learn that Paige might be with some of the angels, the one that had actually created her.  Penry still has Raffe's sword and tries to learn how to use it.  But to find Paige she ends up having to give it up and even try to infiltrate the angels as the biggest enemies escort.  It is here that she spots Raffe again, and the true use of the scorpion creatures comes to light, and you might say that all hell begins to break loose.

I know that's a very confusing summary, but I don't know how else to explain it without giving things away.  Just know that it was a good one, didn't suffer from the 2nd book slump in my opinion either.  Now, I'm so eager to read the final book in the series!
Posted by Lisa Mandina at 8:00 AM