I am so excited to show off the cover for the final book in The Secret Diamond Sisters series by Michelle Madow.  I'm a huge fan of Michelle.  I loved her Transcend Time series.  I also remember her as really the first author I met my first year at BEA back in 2012.  She was standing in line in front of me for the Bloggers Convention day, and I recognized her and said hi.  I am still mad at myself for not getting a picture with her that day.  I also have yet to get a book of hers autographed, never have them when I've seen her.  Last summer I had just tweeted that I hoped I'd run into her and get a picture this time, and she walked by in the crowd! 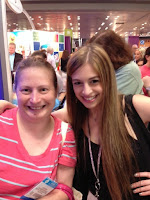 It was so neat.  I did get a picture this time, and she also told me that there was a character with my last name in the 2nd book, Diamonds in the Rough.  Very cool.  But anyway, back to the post at hand.

What happens in Vegas stays in Vegas … but that doesn’t matter when you live there. Sisterhood, first crushes and scandalous secrets explode in book three of Michelle Madow’s The Secret Diamond Sisters. 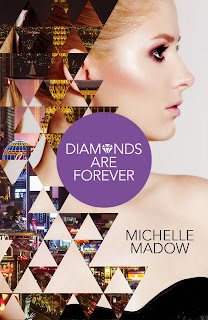 It's cold outside, but the drama is hot!

The Diamond sisters jet to the mountains for spring break, and Savannah's flirt-mance with international pop star Perry Myles continues as her pursuit of stardom succeeds. But is it "meant to be" with Perry, or has the right guy been in front of her eyes this entire time? Meanwhile, Courtney takes the next step with her secret boyfriend—and future stepbrother—Brett…and with Adrian and Rebecca's wedding approaching, they feel more pressure than ever to reveal their relationship. Peyton might be figuring out a direction for her future, but she feels responsible for her bodyguard Jackson being fired, and wonders if the best way to find solace for her guilt is in the arms of someone else. But the biggest bombshell will change everything once again, because Madison's ready to tell the Diamond sisters the truth about the huge secret she's uncovered. And with Oliver, the boy who betrayed her but who could be the love of her life, in the hospital fighting for his own life, she might need the Diamonds more than ever.

Other Books in the Secret Diamond Sisters Series: 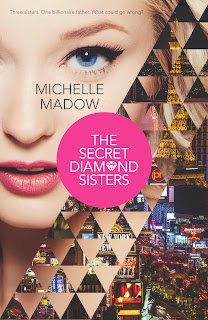 Three sisters. One billionaire father. What could go wrong?

The three sisters grew up not knowing their father and not quite catching a break. But it looks like their luck is about to change when they find out the secret identity of their long-lost dad—a billionaire Las Vegas hotel owner who wants them to come live in a gorgeous penthouse hotel suite. Suddenly the Strip's most exclusive clubs are all-access, and with an unlimited credit card each, it should be easier than ever to fit right in. But in a town full of secrets and illusion, fitting in is nothing compared to finding out the truth about their past. 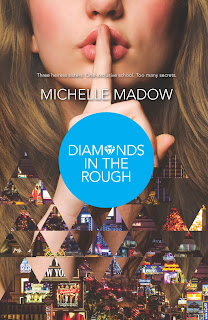 The three Diamond sisters survived the summer in style after coming to live with their long-lost billionaire father. But making a place for themselves at their exclusive new Las Vegas private school is throwing them any number of gold-plated curves. Savannah's YouTube stardom turns into a Sweet Sixteen reality show extravaganza—with complimentary enemies on the side. Dangerous flirtations don't keep Peyton from a gamble that will risk far more than she planned to bet. And when Courtney and the sisters' archenemy, Madison, uncover two explosive secrets, it will rock even this town of glittering illusion—and turn their lives upside down all over again.

Praise for The Secret Diamond Sisters:

“Sexy and electrifying ... Gossip Girl meets The Princess Diaries in a city that never sleeps.” -Booklist

“This quick and entertaining read is filled with glitz and glamour ... get ready for one crazy and fabulous ride.” -RT Book Reviews

“I opened The Secret Diamond Sisters and was transported to Vegas … there was never a dull moment! It’s the helpless romantic's dream.” -LitPick Five Star Book Review Award

“Highly addictive! Hold on tight, because The Secret Diamond Sisters throws you head first into the Vegas fast lane. Three every day teens navigate the slippery slope of wealth, popularity, and too much freedom, along with family drama, cat fights, and more gorgeous guys than should be legal. A fun ride not to be missed!” – Rachel Harris, NYT Bestselling Author

“Boasting juicier secrets, more extravagant luxury, and higher stakes consequences, Michelle Madow has shown that in her world of decadently sinful Las Vegas nothing is as it seems, and all bets are off.” -Glass of Wine Reviews 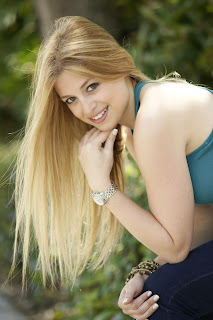 Michelle Madow wrote her first novel, Remembrance, in her junior year of college. Remembrance is the first book in The Transcend Time Saga, a three part series about reincarnation and true love that Michelle successfully self-published. The series was inspired by Taylor Swift's "Love Story" music video. Michelle's latest YA series, The Secret Diamond Sisters, about three sisters who discover they are the secret heirs to a Las Vegas billionaire casino owner, was published in March 2014 by Harlequin Teen. The second book in the series, Diamonds in the Rough, released in November 2014, and the third book, Diamonds are Forever, will be coming out in November 2015. Michelle is active on social media networks and has toured across America to promote her books and encourage high school students to embrace reading and writing.
Michelle lives in Boca Raton, Florida, where she is writing more novels for young adults. She loves reading, spending time with family and friends, traveling the world, shopping, Disney fairy tales, Broadway musicals, and loves talking with fans on Facebook (/MichelleMadow), Twitter (@MichelleMadow), and Instagram (@MichelleMadow).

To chat with Michelle and other fans about her books, join Michelle Madow's Street Team on Facebook!