Review: 5 to 1 by Holly Bodger 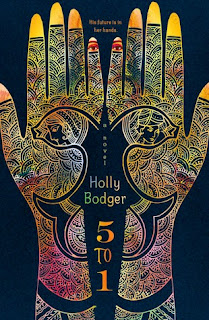 First, thanks to Edelweiss and Knopf Books for Young Readers for allowing me to read an e-galley of this book.  I really liked the theme of the book, and the idea behind it.  It is a great story idea, and I even liked most of how it was told.  My only issue was that I wanted more.  It's understandable why it was so short, but still.  I just kind of wanted more.  More story, just more.  Not sure exactly, but I was left feeling that way.  However it was a very quick read, and very interesting as well.

It is told from two points of view, Sudasa, the girl who must choose her husband after he goes through 6 trials with four other boys.  Her part of the story is told in verse.  She isn't happy with how the whole thing works.  She doesn't feel as if she should be a prize.  And when she gets to the trials and sees that somehow the random choices of matches for her includes her cousin, she knows things aren't as they should be.  A marriage with her cousin would only be helpful for her grandmother, who owes a debt to his mother.  She has never felt that way about him, and as we see him through the trials, he is not a very nice boy.

The other point of view is one of the other boys, Kiran.  Kiran is the son of a poor farmer.  Winning the trials would mean a life much different than he is used to.  All the food he needs, luxuries, servants, and a wife.  If he loses he will be given a job, one that could be part of the plan his father wants for him.  He wants to go find his mother, who is outside the walls of their town, Koyanagar.  She left when the walls were built, when the new way of life came about. Before the country was so overpopulated that parents would kill any child that wasn't a boy, because they were only allowed one.  Soon the number of girls dwindled to the point where men would grab the girls and take them by force, kidnap, steal them.  Often killing them.  This new town was created to save the girls.  Now girls are held as the most precious, and boys must fight to win them and win the lives of luxuries.

Neither one of them really wants what the trials will bring.  But when Sudasa feels like Kiran might be the way to get away from her hateful braggart of a cousin, she must deal with the fact that he does not want to win. That he has plans. She doesn't want to hurt his plans, doesn't want him to have to be miserable like she will be in her marriage.  But maybe, should she try to go over the wall too?  From all that she knows, things are worse over there, and she won't be able to even make it there in the first place.

A great story, really.  I think that is probably why I wanted more, needed more of the story.  Still a great diverse character and world compared to so many other YA.  Highly recommended.
Posted by Lisa Mandina at 6:41 PM