Review: The Hunted (The Living #2) by Matt De La Pena 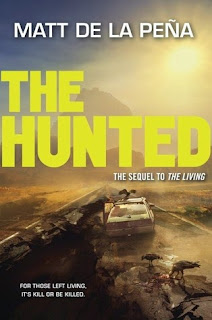 First thanks to Edelweiss and Delacorte Press for allowing me to read an egalley of the sequel to The Living.  I read the first book as an egalley over a year ago, and then was lucky enough to get to meet the author and get an autographed copy of the first book.  Here I am at BEA last summer with the author. 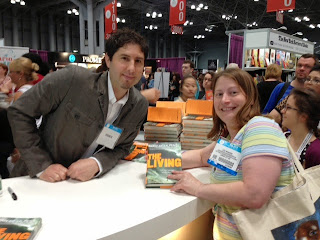 Anyway, on with my review.  Now, of course if you haven't read the first book, I can't promise any spoilers for that book.  In fact I'll have to start out with that in my summary!

We're back with Shy, Carmen, Marcus, and Shoeshine.  Their boat has finally made it to the coast of California from the island where they almost died. They have run out of food and water, and are so glad to be back on land.  Until the get off the boat and are immediately met by one of the gangs that patrols its section.  They are told they must get out, even if they are not sick, no one is allowed in a different section.  So as they hurry out they end up in another section, and this time someone tries to burn them out of the trailer they find to spend the night in.  It turns out there is a biker gang that tries to kill them for entering their area.  But something strange happens. One guy stops when he gets a close up look at Shy's face.  He gives Shy an envelope and tells him to take his friends to the movie lot where it seems to be a kind of safe place.  Shy and his friends are still immune to the disease that has taken people out because of the vaccine they got back on the island.  Their goal, even with the safe place to stay, is to get the extra vials of the vaccine they have to scientists in Arizona.  Not only the vaccine though, they have proof of the pharmaceutical company that caused the disease in the first place, and they want to make sure they have to pay for it.  While at first they want to get to their families, when they see the devastation from the earthquake, tsunami, and the disease, they know they must first get the vaccines to those who can get it to save people left.

Along the way Shy will run into his deadbeat dad, who will try to win his son back by being a better father, his way anyway.  People will get shot, Shoeshine and Marcus.  They will run into Addie, the daughter of the scientist from the company that caused the whole thing, and while she seems to be on her side, her dad will show up at one point and throw a bit of a wrench into their plans.  They will have to try to make it to Arizona while being tracked by helicopters, humvees, and other military/secret agent types of guys. They even have a guy on a motorcycle following them part of the way.  One of them won't make it till the end alive, and only two will make it to Arizona to pass on the vaccine.  Once there they hope to also be reunited with their families, or at least know what has happened.

I won't tell anymore.  Just that while it definitely had what could be an ending, I feel there could definitely be a sequel as I want to know what happened for sure to the person who didn't make it to the end.  And I want to know about the family members we don't know for sure about.

Those of you who want more diverse characters, Matt de la Pena is one of the authors that does it very well.  His stories usually are more contemporary types of stories, and I loved the extra Sci-Fi and disaster parts of this story.
Posted by Lisa Mandina at 10:23 PM