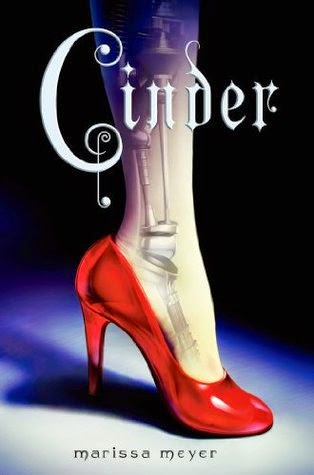 Well, yeah, I know, I'm one of the last people to read this book.  I've had a copy of it sitting on my TBR shelf for about two years now.  I got it at a Scholastic Books Warehouse Sale.  I had a hard time seeing why it was such a popular book as I began reading it.  I'm not saying it wasn't a good read, I just wasn't getting the big deal.  I did finish the book and enjoyed it enough that I need to go on and see what happens next.

It is a Cinderella retelling with a robot/android as Cinderella.  She's part human though, not a complete robot.  She does have a wicked "stepmother".  She was brought home by a man, who then died, and left her with his wife and two daughters.  Really only one of her stepsisters is not nice.  The other one is friends with her. The story begins with the Prince showing up in Cinder's booth where she does mechanical jobs for people.  In fact she is known as the best mechanic around really.  She doesn't want the Prince to know that she has the robot foot and arm, and so wears gloves and also keeps her leg/foot hidden.  He asks her to help him fix one of his own robots, one that has some kind of information in it that he needs, that is very sensitive information that could be bad if it fell into the wrong hands.  Shortly after the prince leaves, someone in the market gets sick with the disease that is killing so many people.  Cinder hides out until it is safe to leave, because she fits the description of the other people/robots that have been taken to be experimented on in order to figure out a cure.

She gets home and of course her two sisters are getting their dresses fitted for the upcoming ball.  When one of her sisters gets sick, her stepmother blames her, and gives her to the lab to be used in the testing.  Well, this leads to finding out more about her past, and also more chances to meet with the Prince, who seems to be interested in her.  Now, the Earth is trying to work out a peace treaty type of thing with the people who live on the moon, and their queen, Levana, is in town to negotiate.  She wants to make a deal with the King to marry the Prince and unite their worlds that way.  But Prince Kai doesn't want to marry her.  There is something about her that creeps him out.  Not to mention the power she has, something that "Lunars" have, hers is mind control, she can sway the way people think.  When more is learned about what is going on up on the moon, an army has been noticed by a satellite, so all the other countries of the Earth are trying to prevent a war.

The Cinderella story has many of the same kind of major story points, the dress, the lost "shoe", etc.  So many things that definitely fit the storyline.  And yet it is its own world, own characters.  I don't know if I'm as gaga over the series as everyone else seems to be, but I will be reading on!
Posted by Lisa Mandina at 8:00 AM