Review: Elena Vanishing by Elena Dunkle and Clare B. Dunkle 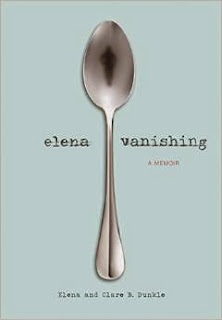 First, thanks to Edelweiss and Chronicle Books for allowing me to read an egalley of this title.  This is a hard book to review.  It was definitely a very interesting read,  but still a hard one to read.  I always want to read books about eating disorders or weight loss memoirs because I feel like they are something I can relate to, or else just something I need to read.  And while no one will ever accuse me of being anorexic, and I could never be because I like to eat, it was scary to realize that some of the things the author thought are very similar to things I think without realizing.

Elena is the author and the main character of the book.  The story is about her life with an eating disorder, anorexia to be specific.  And while she'd really had it before the first part of the book, we kind of start up from the time when someone first points out to her and her family that might be what it is.  It starts when her health first begins to truly suffer, with a heart problem.  She is able to fight the diagnosis of anorexia, at one of the hospitals they even say something like she weighs too much for what they usually take for that program.  What gets to me is how she doesn't eat.  I can't skip meals very often because I get a headache, that gets worse as I go longer without eating.  And then I get nauseated, so much that it is hard to eat to cure the headache which led to the nausea.  While Elena doesn't really have bulimia, there are times that when she is made to eat she does throw up. But she knows how to do it without ruining her teeth, something she is proud of when she hears another girl throwing up in the bathroom at one point.  I can't imagine being as horrible about something as she is.  I can't imagine not wanting help.  But again, I don't have the same issue she has.

As someone who is always conscious about weight and what I look like these days, there were times when her inner voice was very familiar to me.  The thought that when she walked away people were talking about her, calling her fat, or ugly, or something along those lines.  I know that it isn't really a voice to me like it was to her, but I know I have those thoughts about what girls that I walk by think of me, or guys, even people I know I often think they're probably thinking things about me.   So that is what made it hard to read.

I do know that I now want to read the mother's kind of alternate point of view in her own book called Hope and Other Luxuries:  A Mother's Life With a Daughter's Anorexia.  From reading and hearing how her mother acted, and knowing that Elena totally had to be misinterpreting things, I just need to read the mother's side.  The mother's name may be familiar to readers as she is a writer.  I've even read her Hollow Kingdom series and enjoyed it.

So while I do recommend the book if you want to read about the struggles of someone with anorexia, I do warn you to be prepared for how hard it is to read.  How many times you just want to shake Elena and tell her to try, stop giving in to it!  Even when I found out what began it, and you understand why that caused it when she talks through it with the counselors at the end of the book, I still wanted her to just try.  I'm not putting what happened to her down as nothing big, as I also had something similar happen to me, only when I was much older.  But a good, hard read, and when you know how her family had had to deal with her older sister even before she started having the problems, you can see how it all kind of snowballed into such a giant deal.
Posted by Lisa Mandina at 10:23 PM