The Elite (The Selection #2) by Kiera Cass 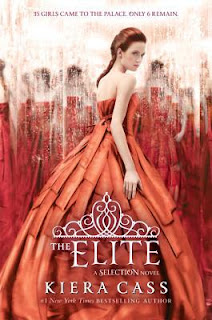 I finally got to read the first book in this series, The Selection, back in May, around the time I got to meet the author.  And as I expected, I fell in love with it.  I'd heard some bad things about the sequel, and while one of them I can see why people said it, I don't care what anyone else said, because I loved this one too!  This was actually the 3rd book I've read for my 2nd Annual September is for Sequels Challenge.
America was still left at the end of the first book, part of the final contestants, or The Elite.  There are less girls to compete against now, but while she seems to have Prince Maxon's interest, and even love, there are things about being a princess that she is not sure she wants or is the right person for.  Having her ex-boyfriend Aspen as a guard at the castle is not helpful in her trying to decide if she truly loves Maxon and could one day be the princess, and even the queen.  And I know one of the complaints with this sequel was that she kept going back and forth between Aspen and Maxon, and while I agree that got annoying, in some cases, I could totally see it.  I know that in college, since I hadn't dated much before then, I often was not sure about letting an old guy/friend go even when I was dating someone new.  And there are some things that happen that I totally can understand why America gets upset with Maxon.  Things that happen with the other girls that she feels are her friends.  Even just the bit about her lower caste and how she doesn't quite know how things work, or why they should still continue to work that way.  The rebels continue to attack, and during and after these attacks we even learn more about them and what they may possibly want.  Maxon shares a private library with America, and he allows her to take one book, to help plan for the Halloween party they are having.  The great thing about this party is that it will be the event when the girls will get to bring their families to the palace, and Maxon will get to meet them. The great thing that happens is that America's father seems to like Maxon, and then he tells her that he is proud of her whatever she decides.  Then something unthinkable happens the day after, and America does something that now jeopardizes her standing as one of the finalists.  Something that makes her look unworthy to be a princess in the King's eyes.  It also seems that Maxon may be getting to know some of the other girls better as well.  And America isn't sure if he no longer wants her, or what is going on.  These are the things that upset her and make her do more things that cause her to get to the point where she may be the next to leave.
Again this really did remind me of The Bachelor, in the fact that Maxon seemed to be favoring certain girls, and not others.  I don't know how many times I've watched that show, thinking one girl was the one he favors, then at the end to be surprised in which one he picked.  We do learn more about the rebels, not much, but a little.  We also learn a lot about how the caste system came about, through the diary of the founder.  And we learn that really, it wasn't a great start, and from what America reads, she's not sure any of this was done to help the country as they were all taught.  From what she reads, it seems done by a selfish man who wanted the power and riches for himself and his family.
I still rooted for America, even in the parts when I thought she was going too far and being too untrusting.  The way it ended makes me so eager to read on.  I can't believe I now have to wait so long for the next book!  But I will be eagerly awaiting it!
Posted by Lisa Mandina at 10:00 AM