For the Good of Mankind? by Vicki O. Wittenstein 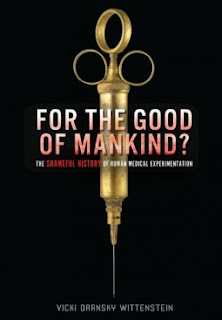 Thanks to Netgalley and Lerner Publishing Group for allowing me to read this e-galley over the summer.  My interest in this book was probably sparked from both the fact that I am a science teacher, as well as the fact that I read The Immortal Life of Henrietta Lacks earlier this summer.  This book was really interesting to read about all the different things that have been done in the name of medicine, for the good of mankind, and these are things within the past century!  Now I had a bit of trouble reading the e-galley on my new Nook HD, I'm still learning with some of the documents on there.  So there were certain pages, the ones at the beginning of each section, that were maybe mostly all black background, that for some reason I could never seem to get them to load.
Some of the horrible medical experiments I'd heard of before, like the Nazis experimenting on their prisoners, as well as the Tuskegee syphilis experiment, and the using prisoners for medical testing.  But there were other things that were new to me, and still very disturbing.  With the Nazi chapter they talked about a set of twins that I had actually read their book before, Surviving the Angel of Death.
One of the stories I had never heard about was a little boy who came to America from Australia to hopefully get a cure for his cancer, instead they tested some kind of radiation on him, and he died shortly after he visited.  The fact that they would take orphaned children and use them in their experiments was horrible to think about.  And there were also those in the military that it became part of their job to be experimented on.
The book goes through and talks about The Manhattan Project, as well as one I'd heard of from watching The X-Files, Operation Paperclip.
This is a really good book to have, probably most likely in a middle school library, but could also be used in high school.  While it may be a little simpler than you might think for students in an advanced class, it has so much history, as well as good science, that it would be great for students needing to research any of these events.  As well as I feel many students would find it just an interesting book to read.  I will definitely be recommending it to librarians I know, as well as science teachers that I feel could use it with their students.  Also some Social Studies/History students could probably use it.  And with the new Common Core Standards, it would be a great non-fiction choice for English classes as well.
Posted by Lisa Mandina at 10:00 AM