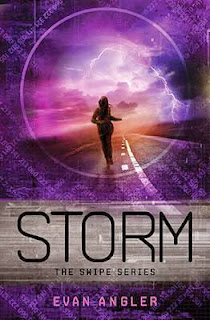 Thanks to Thomas Nelson publishing and Netgalley for allowing me to read an e-galley of this, even though it was actually published earlier this year.  This was my #8 for my 2nd Annual September is for Sequels Challenge, meaning that even if I finish the book I'm currently reading, I won't have read any more sequels than I did last year.  Oh well, maybe my challenge goal will just stay at 8 books a year, and if it does more than that, great, if not, then at least I got some sequels read that might otherwise have waited until even later.
Once again I've enjoyed the story, and I really see more and more how it is going into the "end times" and what the mark will mean.  The title of the series is Swipe, meaning that people "swipe" their mark in order to pay for things, have jobs, etc.  This is all based on the biblical story of the mark of  Satan.  Now I don't remember a lot about the missing people in the first two books, I'll have to go back and read my reviews from the them, but we do hear about the people that disappeared.  I was a huge fan of the Left Behind series, and so this fell right into that same interest.  I do like how this story does it differently though.  In this story we get the plague, but again, it is quite a different story than other tellings of the end times.  I like the way the plague happens.  And how the guy that is pretty much being set up to be the Anti-Christ, even uses what happens with that to build his own support.  While we do get a bit of the religion in this, it is not as in your face as it was in the Left Behind series.  And I think for a kids' book, that is a good thing.
Logan had run into his sister in the last book, and now we have to decide is she really on his side, or not.  She continues to do things that would seem she is now really on the side of the Marked, but there are other things that seem as if she is looking out for her brother.  One of the Dust is still stuck there with Lily, and she is trying to break him to become one of the soldiers.  A drought has been going on, and we meet some new characters in the town where the "weather mill" is.  This town and the weather mill will become a major turning point in the story.  In more ways than one.  Erin, thought to be a traitor by Logan before, is now suffering from the plague, and Logan and the others have taken her to meet the doctor who invented the virus, the one that was supposed to take out the markless, but instead is affecting the Marked, like Erin.  They learn of sabotage, and must figure out how to save Erin hopefully, as well as to keep the plague from actually getting out there and making everyone sick.  We also find out that Evan Angler's book Swipe, is being published and it is found in a library.  People are reading it, and it is giving people clues to what Logan is doing, even in a way that could be used to incriminate him when the Anti-Christ needs it.
Wow, this is really a mess of a review I think.  I think maybe I need to get back to doing reviews the way I did before someone commented on them saying I was spoiling.  A great story, but now I am of course very eager to read the next story!
Posted by Lisa Mandina at 11:24 AM