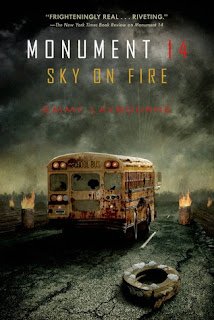 This is the first book I finished for my 2nd Annual September is for Sequels Challenge.  It's a short book, so a good way to get started, but it was a good book, and one that I'd been waiting to read for awhile.  In the first book we had the 14 kids left stranded in a big department store, maybe like a Walmart?  That's what it seemed like to me.  Outside there had been some disastrous weather and earthquakes, along with a poisonous chemical released in the air from the nearby NORAD compound by accident.  The compound caused different types of reactions in people based on their blood types.  The kids had been dropped off there by their bus driver while she went to get help.  The ages of the kids ranged from about 5 or 6, up to high school age.  The two main characters are brothers, Alex and Dean.  Dean is the older brother, 16, and Alex is younger, 13.  Here come the SPOILERS if you haven't read the first book.
Due to allowing some outsiders to come into the store to share with them, and then having those two attack and try to rape one of the girls, one of the older boys gets injured.  Some of the kids decide they need to get him on the school bus and try to get to the Denver airport, where they hear the military is waiting to help people and get them to safety.  Alex goes with that group.  Dean stays back with some of the younger kids and his long time crush, Astrid, because Astrid feels they should stay and wait for help.  Along the way the kids on the bus run into all kinds of trouble.  One thing they notice is that there is some kind of mold growing on all the cars, and that none of the cars that have been outside have tires anymore.  When trouble strikes (I won't tell you how) they must leave the bus, and try to make their way on foot.  The only problem is all their supplies of food were on the bus, and of course the air isn't safe to breath.  Plus, there is no knowing what kind of people may be out there, the ones that the gas turns into killers are just one worry.  Thanks to the help of a couple people along the way, they learn things that can help them survive, and finally can get back on their way, even after some people aren't as helpful.
Back in the store, Dean's group is trying to stay safe, even with people banging on the outside of the store trying to get in, even to the point where someone tries to drive a heavy piece of machinery into the back of the store.  Astrid's boyfriend Jake returns.  And Astrid is hoping he can be what she'd wanted him to be, and that hopefully his time away has helped him with his drug use and similar behavior.  But of course some of the bad guys will find a way in, and Dean and Jake must find a way to save the rest of the group from these seemingly deranged boys.
I feel like this story was even better than the first.  The details and all the different things that happened were really well developed and made the story very interesting.  While it definitely left off at a point that was an ending, it was also left that there could be a next story.  And I find on Goodreads the listing for a #3, so that made me happy!  I also found a 0.5 and a 1.5 and downloaded them right away!
Posted by Lisa Mandina at 8:04 PM