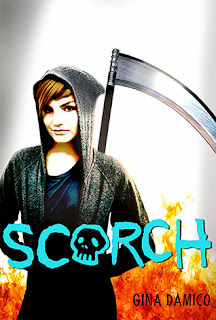 This is a book, a series, that I love, love, love!!  And of course it is in #7 in my September is for Sequels Challenge.  Again, it has been sitting on my TBR shelf forever, which was a huge oversight on my part, because like the first one, it was soooo good!  One I didn't want to put down, even when I had to because I had to work, or sleep, or drive, etc.
We left off with Zara having somehow gotten Lex's ability to damn people.  Now, it might not seem so horrible that she got that power, because the people she is damning, which also basically incinerates them, are all horrible criminal type people, murderers, etc.  But for the Grim Reapers in this story, that is not allowed.  They are only allowed to kill those who are supposed to be dead according to their instructions.  Because of what happened, Lex is back in the town of Croak to try to help catch Zara.  But when she gets back, she finds that some in the town are not happy to have her back, in fact they have decided to punish all of the Junior Reapers.  Things take a turn when Zara begins damning innocents, a fact which the town is even unhappier about because she has come to Lex with a demand.  A demand for the "wrong book", the one that a mythical Grim from the past, Grotton supposedly wrote about how to do all the things he decided to do that went against the rules.  Soon a few of the townspeople convince most of the others that they must get rid of Lex's Uncle Mort as mayor, and take over.  Then when a bombing occurs in the middle of town, they decide they must put all the juniors and Mort in jail.  When they finally escape, Mort takes them to another Grim town, DeMyse.  DeMyse is way different from Croak, it is quite a bit like Las Vegas in description.  Here they try to hide from Zara, one reason they feel this is a good place is that she hasn't really gone to take anyone from there as she has from the other Grim cities.  All the time they are fighting either their own townspeople, or trying to hide from other dangers like Zara, they continue to try to figure out the mystery of the book that Zara wants, and how they can both find it, and keep it from her.  Along the way there are many surprises, and even a few deaths of characters that we know and love.  I won't tell you who, I'll let you read and discover the sadness for yourself.
I loved the book, I can't say it enough.  This author's writing literally makes me laugh out loud, no matter where I am while I'm reading.  As I said in my review of the first book, Croak, I really enjoy the sarcasm of the characters.  I love the teenage romance between Lex and Driggs.  It is so realistic, and I have to say a relationship that I would be comfortable in, as the sarcasm in my family can be quite that extreme.  One page I had to mark to talk about in my review was page 121, there is a reference to Silent Bob, a character in Kevin Smith movies, that is played by Kevin Smith.  Kevin Smith is one of my favorite actors/directors/writers/personalities.  So I love that he was in this story in this way.  Now, the only thing I didn't like about the book was the ending.  Which actually, I know that the ending is one of the best types there can be.  But, I hate what happens!  I don't want it to happen, and I really hope the author can come up with some kind of way to fix it in the next book, and I don't really care if turns out to be unrealistic.  Maybe it can somehow relate back to one of the surprises that took place with the person that it has to do with in this book.
I highly recommend this book to anyone who liked the tv show Dead Like Me, or enjoys stories about Grim Reapers, and you must also really be a fan of sarcastic people.  There's just no way around it.
Posted by Lisa Mandina at 5:04 PM