3rd Time is the Charm

So I still have 100 pages left to read of my ARC of The Dream Thieves, so I'm not going to be ready to write the review till tomorrow.  Now normally I can get through 100 pages really quickly, but even the fact that Maggie Stiefvater's writing hooks me and doesn't want to let me go when I pick the book up, her books take me longer to read.  Why?  Because they are so detailed and so much to read, so much to catch, that they are not books that I can skim over and skip parts.  I want, need, however you want to describe it, have to read every little detail, every word.  And so, like I said before, it'll be tomorrow before I'm done.  So, I guess to tie my blog over with a post till then, I'll just have to talk about going to see Ms. Stiefvater speak tonight about this very book!
It was so neat to see her again!  So thanks to Rainy Day Books for hosting her visit and kickoff to the tour for her new book.  While we heard some of the same stories, (the wolf trainer), we also got to hear many new ones.  And as usual, she is such a great speaker, so funny!  Someone I wish I could hang out with in real life.  One main thing she started off talking about is how people always want to know which of her characters are most like her, or are her.  So then she went through all the main characters in The Raven Boys.  Afterwards she did a fun reading of one part of the new book, and even had guest readers!  One was Tessa Gratton, another author I really enjoy, in fact, I got to be the host for her during the Authors are Rock Stars Tour.  Along with Ms. Gratton were her parents, her dad was also in the reading, playing Mr. Gray, which was quite funny, until the parts where it kind of became awkward, as Maggie was reading the part of Maura, Blue's mom in the story, who may be interested in Mr. Gray.  Here is a picture of that scene: 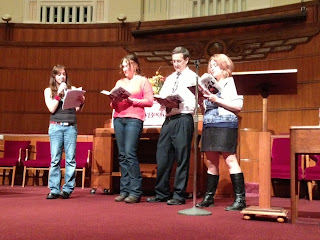 After the reading, there was time for questions.  I waited till it seemed most others had asked their questions, and also after a mention of a deleted scene from a story.  And then I asked if the character who had an afghan, and was supposed to have my last name, that was in the first draft of The Raven Boys, might make an appearance in the 3rd book.  Happily at that point she remembered me, and explained to the rest of the audience what I was talking about.  Yay!  Then, after about half the people lined up for autographs, the other half got to go outside and start spray painting the Mitsubishi that she brought, that from her stories, was probably purchased accidentally while she was doing research for The Dream Thieves.  If you haven't seen the video about it yet, check this out:


I forgot to take a picture of the car tonight, and by the time I got to go out and paint something, it was dark outside.  So nothing else to add for that.
But I was in the first group to get autographs, so I'll share my pictures with Maggie and Tessa.  I only wish Brenna Yovanoff had been there as well, like she was last time, I brought two of her books to get signed.  And I also forgot to bring the copy of The Scorpio Races I just bought specifically to get signed.  Oh well, I guess it leaves me something to bring next time I see her!  I also told her about how my picture of her and Brenna and Tessa from BEA 2012 is going to be in a biography book about Maggie that is specifically for school libraries.  And while she and Tessa both told me not to give up on maybe my last name being used some day in one of her books, to keep bugging her about it, they said now I was kind of connected with her in print!  Anyway, below are my pictures, first with Maggie Stiefvater, then below that with Tessa Gratton. 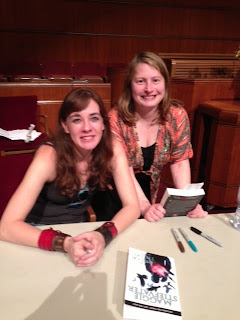 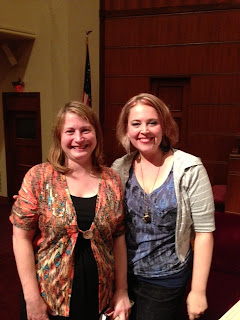 So it was another rock star night for me!  Which means I'm not too upset that I was unable to finish The Dream Thieves today.
Posted by Lisa Mandina at 9:38 PM