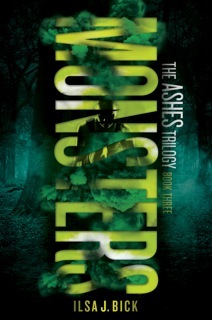 This is the 2nd book I've read for my 2nd Annual September is for Sequels Reading Challenge.  Unfortunately it took me a bit longer to read than I was hoping, but to be fair, it was a pretty long book, around 800 pages.  I've been a big fan of this series since I read the first one as an e-galley, and you can see my review of Ashes HERE.  Then I got a copy of the 2nd in the series, Shadows, when I attended BEA 2012.  As with the 2nd book, it had been such a long time between it and the 3rd one, that at first I was a bit confused, and trying to remember who a lot of the people were, and what exactly had happened at the end of the last one.  Once again, as with the first book, I have to thank Egmont USA for allowing me to read an e-galley.  And while I first got approved to read it through Edelweiss, I ended up finding it on Netgalley and being able to download it straight to my Kindle App to read it much easier than with the other file I'd downloaded.
What I do remember about the ending of the 2nd was the big explosion, and the character Wolf/Simon, that had been with Alex, and I remembered all the main characters, Tom, Ellie, Alex, Chris.  But many of the other names were not as easy for me to remember, and so that took me a little longer to get into the book.  And when I got the end, well, there was a character guide, something that would really have been nice to have at the beginning of the book, and when the book is available to buy at stores this coming week, hopefully they'll have figured that out and moved it.  If not, and you will be buying the book, go ahead and flip to the end and read through the character guide if you feel a refresher would be helpful.  But once again, as soon as I kind of figured out who the people were, and definitely when I was reading any of the parts about the main characters, I was really sucked back in, wanting to know what was going to happen next.  That's the thing with these books, and this author.  She has created such a wonderful world, giving so many details and using so much beautiful figurative language, that it is worth reading every word, as long as it takes to get through all 800 or so pages.  While there were times as I read that I wondered if the story would be able to be finished, or at least summed up for the end of a trilogy, it did so, and not in a way that seemed rushed.  Everything was set out in a perfect order, with all the pieces of the puzzle, each character's part in the story finishing up exactly where it needed to, to give us that final setting.  We lost some good characters (is it okay if I also include some pets, dogs are such an important part of my life, I'd consider them the characters in my story).  And the bad guys, well for the most part, they pretty much got what they deserved in some way.  Learning what had actually been some of the goals and reasoning behind the things going on with the Changed in Rule made some things make more sense.  And I really enjoyed some more of the science/brain research information that was used or discussed in this final installment.  Unlike one of my normal reviews, I'm choosing not to really talk about the story itself.  As I've mentioned already, the story is so complex and detailed, I'm unsure what I can really talk about without giving things away, or that if you are like I was when I started, might not make a lot of sense until you get yourself refamiliarized with the characters and story.  A really fitting end to the story.  One that I was happy and satisfied with.  Not that there weren't some things I'd like to have known more about, but I'm okay with the bit of explanations we got, they weren't necessarily scenes we'd have needed all the details of.
It comes out this Tuesday.  If you haven't started the series yet, then you are in luck.  You'll be able to read them all in order without having to wait in between, and will not have any of the issues I've mentioned.  But on that note, one other thing.  There was a word that seemed to be used many times, a word that just didn't seem like the right word.  Often it was said someone "squirted" past something.  I've never really heard that word used that way.  And if it had been once, it wouldn't probably have stuck out in my head so much.  But the word was used at least 5 times in the book in the same way.  So, yeah, not a big issue with the story, just something I found quite curious.
Posted by Lisa Mandina at 3:30 PM