Okay, proud of myself for being on top of things, for the most part, with blogging so far this year.  I did one of these wrap-up posts for January, HERE, and I'm hoping to incorporate some more items this month based on things I saw and liked on other people's wrap-up posts.

Here is a list of the books I've read this month, and I've linked them if I got the review done.

1 - 3.  Ruthless King, Defiant Queen,  and Sinful Empire by Meghan March
4.   Courting Darkness by Robin LaFevers
5.  Unlucky in Love by A.J. Renee
6.  Within These Lines by Stephanie Morrill
7.  The Secret to Falling in Love by Victoria Cooke
8.  Off Limits by Vivian Ward
9.  The Boyfriend Whisperer 2.0 by Linda Budzinski
10.  Lucky Suit by Lauren Blakely
11.  To Best the Boys by Mary Weber
12.  Slaughterhouse-Five by Kurt Vonnegut
13.  The Sweetest Match by Abby Tyler
14.  A Beautiful Day in the Neighborhood:  The Poetry of Mister Rogers by Fred Rogers
15.  Rabbit and Robot by Andrew Smith
16.  One in a Million by Jill Shalvis
17.  Moonlight Sins by Jennifer L. Armentrout
18.  Diary of a Bad Boy by Meghan Quinn

Any that aren't reviewed yet are either waiting for a blog tour in March, or just for me to have time to write a review.  Books that I read in January, but didn't get reviewed till February are:

1.  A Danger to Herself and Others by Alyssa Sheinmel
2.  Teaching Tucker by Jillian Quinn
3.  Between Before and After by Maureen Doyle
4.  Motion by Penny Reid
5.  Repeat by Kylie Scott
6.  Shadow and Bone by Leigh Bardugo

Something interesting I noticed with the spreadsheet I'm using to keep track of my books this year is that I only read female authors until just recently.  And then I had three male authors all at once.  Kind of weird!  Or maybe it just shows how much romance I'm reading, although even most of the YA I read is by female authors.

Other February stats I want to talk about have to do with how many posts I did.  Let's just say I did NOT do any better about doing less posts this month.  I've posted 49 times this month, and it's a shorter month than January where I'd only posted 40 times!  March looks pretty busy too. But right now I'm working hard to keep April from filling up and getting crazy. We'll see if I can stick to that as more tours come out that I want to be a part of.  Only 11 were reviews, although one was a mini-review post and had 5 reviews in it.  According to my spreadsheet, my rating average was 4.4 stars, down from 4.5 last month.

Let's move on to talking about how I'm doing on my Challenges: 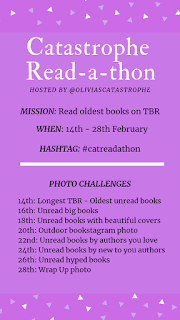 So, I signed up to do this challenge with Olivia's Catastrophe.  I didn't get to all my books that I set as goals HERE.   I did get three read, Slaughterhouse-Five, Rabbit and Robot, and Moonlight Sins.  I started a 4th one, Riot by Jamie Shaw this week, but didn't get it done in time. Because I just had to make sure I was keeping up on my review books.  But I'm still proud of getting about half of my goals done for a two week challenge.  None of them are reviewed yet, that will be in March's post I'm sure. 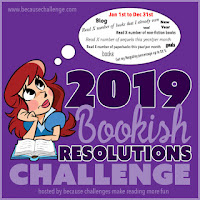 1.  For blogging resolutions I've continued with my Lisa's Looking Forward To posts and created a little button for it:

This month's posts were:
February 3rd
February 12th
February 19th
February 26th - This one also includes the two weeks after it, due to there not being a lot of books each week, and me wanting to get set to start doing this on Wednesdays.

Another goal was to comment on other blogs more often, and I feel like I'm continuing to do better, this is a work in progress. But there were only 5 days this month I didn't comment on someone else's blog.

My third goal for blogging was made last month, and it was to work on cleaning up my Goodreads TBR.  So far it has only been on there, but I plan to do some physical TBR cleaning in the near future, especially if I want to move this summer.  I've been doing giveaways every week with this post, in order to get rid of the ARCs I have already read and know I won't read again, so I'll pass them on.  Still haven't come up with my own badge for this one, but I'm working on it.  I'm also going to start adding a Link-Up to the posts in case anyone else wants to join in, because I know a few of you have!

2.  For my reading resolutions, I am still working on the goal of reading books that were recommended.  I got the review posted for the one I read last month, Shadow and Bone, and then I read a second one, Slaughterhouse-Five by Kurt Vonnegut this month, which I'll probably post a review of in March.  Also, as I mentioned above, I may be upping my goal of books to read on Goodreads to 220, based on the fact that I am more than 5 books ahead.  Haven't decided yet.  May wait until after March to see if I'm still ahead that many or not.

3.  For my writing resolutions I am pretty proud that I've found a critique partner!  I had some suggestions of websites to try, one of them being CritiqueMatch.com.   And the first person who reached out to me has been great!  In fact, what she's having me read for her is sooooooo good already, I feel a little embarrassed to share my writing with her.  I also had a co-worker/friend from the bookstore who is a romance reader like I am, likes all the same authors really, read through my short story.  She liked it, she said, but she also gave me a great idea for something I want to re-do in it.  Since it is kind of based in New Orleans, I also reached out to my friend who the bar in the story is based on, and asked him if I could use the bar's real name, to which he said yes.  So I am feeling really good about finishing up my short story.  I even have a short get away planned during my spring break in March where I'm hoping to really get down to work on the short story and maybe work on finishing another story I've had sitting around.

Well, I've improved by one of my goals for this one by reading Rabbit and Robot by Andrew  Smith this month.  Hoping to pick at least one more if not two, to get read this month! 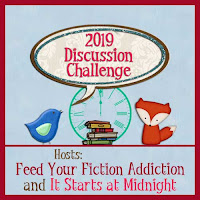 Still no discussions, even though I keep having thoughts on topics I want to do!  I guess I need to just pick one and as soon as it pops into my head, immediately find a spot on my blogging calendar for it.

I need to come up with a button for this one I think, but for the First in the Series Challenge, I haven't read any more since I read Shadow and Bone, but since I only have a goal of 6 for the year, that is probably good.


Looking forward to in March:

Here is my proposed TBR based on my blog tours and review requests for this month:

It kind of looks like maybe I've bitten off more than I can chew? We'll see.  Like I mentioned earlier, I do have spring break, a whole week off, this month, so maybe?  A few listed are ARCs that publishers sent me without me requesting them specifically, so I may not get to them over what I did request and sign up for blog tours. There are also a couple that I don't think I've heard back from the blog tour people yet, so I may not even be getting to read them.  Also a couple were read this past month if you remember from earlier in this post, they'll just be getting reviews posted in March.

One last thing, I'm going to join up with Best of the Bunch hosted by A Cocoon of Books:


Best of the Bunch is a monthly linkup where we can share the best books we read each month and award one of them "Best of the Bunch." This blog hop originated at Lyrical Reviews and then moved over to Always Lost in Stories. At the end of 2014, hosting was handed over to A Cocoon of Books.

At the end of each month, take a look what you read that month and share your favorites. Then tell us which one is the Best of the Bunch — the one everyone should add to their to-read lists right now. You can use any criteria you want to determine which book to award Best of the Bunch. Then come back here and link up! The linkup will post at midnight Eastern Time on the last day of each month.

On your post, please include a link back to this page or to the homepage for A Cocoon of Books!

I'm going to choose two, one is my top YA read of the month: 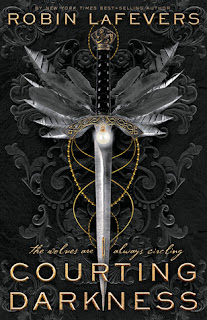 I loved so much getting back to one of my favorite all time stories and the characters!

Now, for my Adult Romance top read for the month, I'm going to actually cheat a little and pick a trilogy that I listened to this month, because they were so good I couldn't wait in between each one!


I think that's all I need to wrap up, for now!  I did link to the giveaway I have going until midnight tonight, and a new one will start tomorrow on my Cleaning Up My TBR post.
Posted by Lisa Mandina at 6:30 AM