Blog Tour Review: Wicked Saints (Something Dark and Holy #1) by Emily A. Duncan 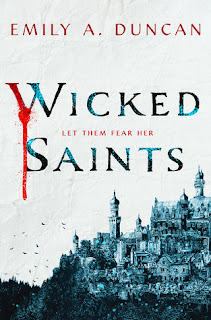 
“Prepare for a snow-frosted, blood-drenched fairy tale where the monsters steal your heart and love ends up being the nightmare.” - Roshani Chokshi, New York Times bestselling author of The Star-Touched Queen
A girl who can speak to gods must save her people without destroying herself.
A prince in danger must decide who to trust.
A boy with a monstrous secret waits in the wings.
Together, they must assassinate the king and stop the war.
In a centuries-long war where beauty and brutality meet, their three paths entwine in a shadowy world of spilled blood and mysterious saints, where a forbidden romance threatens to tip the scales between dark and light. Wicked Saints is the thrilling start to Emily A. Duncan’s devastatingly Gothic Something Dark and Holy trilogy.
“This book destroyed me and I adored it.”- Stephanie Garber, New York Times bestselling author of Caraval

My Review:
So, it took me a few chapters to really get into this.  But once I did, I was very intrigued by this world, and their use of magic, and their gods.  This story was so complex and there was so much to follow and learn about as I read.  It took me a little longer to read because of that, but then a fantasy story like this always does as you get the world-building going.  Of course we know that Nadya is our good side, the one we are rooting for, but it is also easy to wonder if her fighting for her gods is something that maybe she does need to take a step back from. Her travels and tenuous truce with Malachiasz to work together towards their supposedly common goal were full of so many twists, and especially once they reached the capital city in Grazyk, it almost gave me whiplash, like watching a tennis match, wondering who was really the bad guy.  Who could Nadya really trust, who was really on her side, were the feelings she was developing for an assumed enemy ones that could be trusted, or was she being tricked?

The monsters that we were worried about at the beginning became allies.  And those that Nadya thinks are allies may be the true monsters, more than she even realizes until it is too late.  But I could see a bit of redemption or want of redemption even in our monster at the end, and I look forward to another book for this story, to see just what is real and what is not.  That's a warning for you, that while this isn't a cliffhanger really, it doesn't end in a way that things are all wrapped up.  We must have more.  Hopefully when the next one comes out, I'll be lucky enough to get a copy to read and have plenty of time to read it.

When you start, just know that this image below of the pronunciation guide will be very helpful.  It definitely helped me as I was reading. 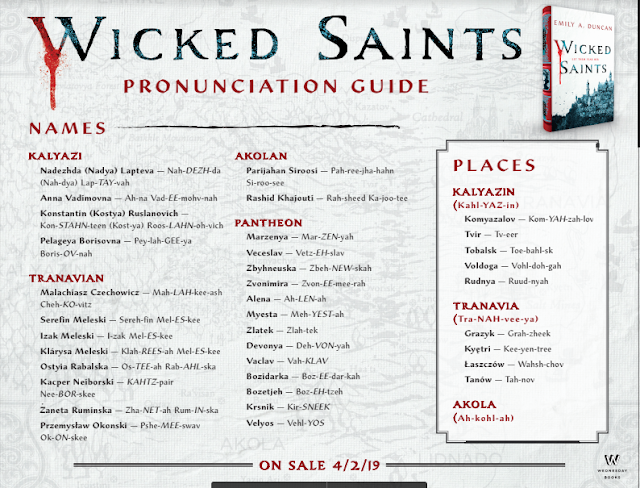 Other Reviews:
“Prepare for a snow frosted, blood drenched fairy tale where the monsters steal your heart and love ends up being the nightmare. Utterly absorbing.” - Roshani Chokshi, New York Times bestselling author of The Star-Touched Queen

"Full of blood and monsters and magic—this book destroyed me and I adored it. Emily is a wicked storyteller, she’s not afraid to hurt her characters or her readers. If you’ve ever fallen in love with a villain you will fall hard for this book." - Stephanie Garber, New York Times bestselling author of Caraval

"This is the novel of dark theology and eldritch blood-magic that I’ve been waiting for all my life. It’s got a world at once brutal and beautiful, filled with characters who are wounded, lovable, and ferocious enough to break your heart. A shattering, utterly satisfying read." - Rosamund Hodge, author of Cruel Beauty and Bright Smoke, Cold Fire

“Wicked Saints is a lush, brutal, compelling fantasy that is dark, deep, and bloody—absolutely riveting! With a boy who is both man and monster, mysterious saints with uncertain motives, and a girl filled with holy magic who is just beginning to understand the full reaches of her power, this gothic jewel of a story will sink its visceral iron claws into you, never letting go until you’ve turned the last page. And truthfully, not even then -the explosive ending will haunt you for days! ” - Robin LaFevers, New York Times bestselling author of the His Fair Assassin trilogy

“Dark, bloody, and monstrously romantic. This is the villain love interest that we've all been waiting for.” - Margaret Rogerson, New York Times bestselling author of An Enchantment of Ravens

"Seductively dark and enchanting, Wicked Saints is a trance you won’t want to wake from. Duncan has skillfully erected a world like no other, complete with provocative magic, sinister creatures, and a plot that keeps you guessing. This spellbinding YA fantasy will bewitch readers to the very last page." - Adrienne Young, New York Times bestselling author of Sky in the Deep