Blog Tour Review with Giveaway: The Everlasting Rose (The Belles #2) by Dhonielle Clayton 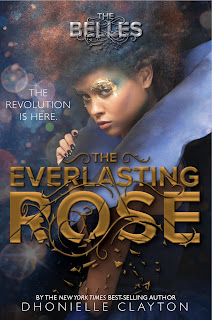 Title: THE EVERLASTING ROSE (The Belles #2)


In this sequel to the instant New York Times bestseller, Camille, her sister Edel, and her guard and new love Remy must race against time to find Princess Charlotte. Sophia's Imperial forces will stop at nothing to keep the rebels from returning Charlotte to the castle and her rightful place as queen. With the help of an underground resistance movement called The Iron Ladies-a society that rejects beauty treatments entirely-and the backing of alternative newspaper The Spider's Web, Camille uses her powers, her connections and her cunning to outwit her greatest nemesis, Sophia, and restore peace to Orleans.

Once again the author took us into this very vivid world where there were surprises and amazing things around each corner and after the turn of every page.  Along with Camile, we get to learn how the "other half" lives.  Since she'd been sequestered most of her life, first with the other Belles, and then in the palace, she didn't know how it was out in the "real world" of this story.  That was very fascinating and so neat to read.  Bringing back some characters in new roles to this world was something that kept me as a reader on my toes, turning pages to find out if they were really good guys now, or if they'd turn around and betray Camille and the other Belles again.  Of course there were other characters that we'd thought of as friends, that turned out to once again, not be quite who they'd seemed to be.

I loved the teacup dragons so much!  Of all the teacup animals, I kind of want one of those for sure!  As with the first book, as I got closer to the end, I began to wonder if there would be another book, because I couldn't tell if it would be finishing up the series or not.  I believe it did, although it seemed maybe a bit rushed in a way?  That could be just me.  But I liked the story, loved being back in this beautiful world, and seeing our characters again.  Definitely a fitting conclusion to a great, original story. 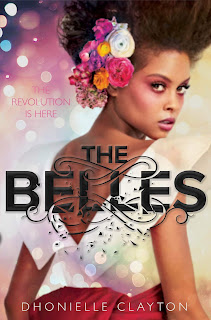 
Camellia Beauregard is a Belle. In the opulent world of Orléans, Belles are revered, for they control Beauty, and Beauty is a commodity coveted above all else. In Orléans, the people are born gray, they are born damned, and only with the help of a Belle and her talents can they transform and be made beautiful.

But it’s not enough for Camellia to be just a Belle. She wants to be the favorite—the Belle chosen by the Queen of Orléans to live in the royal palace, to tend to the royal family and their court, to be recognized as the most talented Belle in the land. But once Camellia and her Belle sisters arrive at court, it becomes clear that being the favorite is not everything she always dreamed it would be. Behind the gilded palace walls live dark secrets, and Camellia soon learns that the very essence of her existence is a lie—that her powers are far greater, and could be more dangerous, than she ever imagined. And when the queen asks Camellia to risk her own life and help the ailing princess by using Belle powers in unintended ways, Camellia now faces an impossible decision.

With the future of Orléans and its people at stake, Camellia must decide—save herself and her sisters and the way of the Belles—or resuscitate the princess, risk her own life, and change the ways of her world forever. 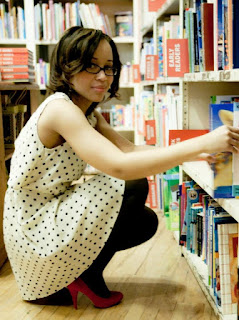 Dhonielle Clayton (“Dhon” like “Don” or “Dawn”) spent most of her childhood under her grandmother’s dining room table with a stack of books.


She hails from the Washington, D.C. suburbs on the Maryland side, but now lives in New York City. She was an extremely fussy and particular child with an undying love for Cheerios (honey nut only), pink lemonade, and frosted animal cookies. A self-proclaimed school nerd, she loved covering her books with brown paper and filled her locker with Lisa Frank stickers. She loved putting headings on her homework, odd-looking pens and freshly sharpened pencils, and numerous notebooks to fill with her research. On most Saturdays you could find her with her equally nerdy Dad at Crown Books and then the comic bookstore where she stocked up on her weekly reading material. Plus, she was so spoiled that her grandfather took her to the library after school almost daily.


She attended Our Lady of Good Counsel High School because her parents thought Catholic school would keep her out of trouble. She went to Wake Forest University, and studied pre-med until she received a fateful F in Chemistry. This setback prompted her to change her major to English, and earned a BA. She rediscovered her love of children’s fiction by re-reading Harriet the Spy, which pushed her to earn an MA in Children’s Literature from Hollins University and an MFA Writing for Children at the New School.


She taught secondary school for several years – at a pre-professional ballet academy and a private K-8 school. She spent most of her twenties in and out of America – living in London, Paris, a small Japanese town, Bermuda – and wandering the planet. She’s been on five out of seven continents, and has grand plans to reach all of them.


She is a former elementary and middle school librarian, and co-founder of CAKE Literary, a creative kitchen whipping up decadent – and decidedly diverse – literary confections for middle grade, young adult, and women’s fiction readers. She is also COO of the non-profit We Need Diverse Books.


What’s next? She will be enrolling in culinary school in New York City and plans to open up a restaurant in the city of her soul, Edinburgh, Scotland.