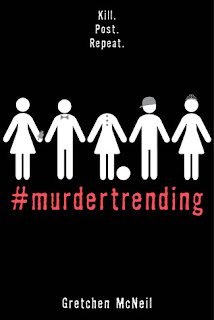 Synopsis:
WELCOME TO THE NEAR FUTURE, where good and honest 8/18 citizens can enjoy watching the executions of society’s most infamous convicted felons, streaming live on The Postman app from the suburbanized prison island Alcatraz 2.0.When eighteen-year-old Dee Guerrera wakes up in a haze, lying on the ground of a dimly lit warehouse, she realizes she’s about to be the next victim of the app. Knowing hardened criminals are getting a taste of their own medicine in this place is one thing, but Dee refuses to roll over and die for a heinous crime she didn’t commit. Can Dee and her newly formed posse, the Death Row Breakfast Club, prove she’s innocent before she ends up wrongfully murdered for the world to see? Or will The Postman’s cast of executioners kill them off one by one?


Scream Queens meets The Hunger Games in #MURDERTRENDING (On Sale 8/8/18) by Gretchen McNeil. In this gruesome young adult novel, seventeen-year-old Dee Guerrera is wrongfully convicted and sent to a prison island where government-sanctioned killers hunt down convicts and stream their deaths on social media for "spikes.”

With its morbid, tongue-in-cheek sense of humor and twisty, gasp-inducing mystery, this novel has already been optioned for development by television studio ABC Signature.

My Review:
This was an awesome book!  It totally feeds into how social media works today, as well as having a great mystery to be solved that keeps you guessing until the very end!  I totally agree with the synopsis about how it is similar to The Hunger Games, because I definitely got that feeling as I was reading about how the executions/murders were televised.  So much of this story had all of McNeil's perfect humor while fitting into what would make itself a great horror film, or as it also says in the synopsis above, a great TV series.    All of the characters were were interesting,  even the ones we didn't get very long to know since they ended up being on the cutting block, literally.

The story had a lot of creative, unique bits to it, but also pulled in a lot of pop culture references.  What is funny to me about some of those references is that while the teens in the story basically understood what movie it was from, they didn't get all the specific details.  I loved that, because so often teens may know of a movie or singer, etc., but it wasn't actually something they'd watched themselves, so little details authors who are adults, like I am, might go over their heads.  Like the scene from Zoolander that one of the "Painiacs" as Dee's new friend Nyles has named them, is setting up for.

Of course, then there were some things that I felt surely Dee should have figured out earlier.  Like the Postman, his identity, and how it could connect with her past.  Especially since we got the whole story of it, something that she would really have been pretty well aware of.  But then to make up for it, I also really like how the author was able to throw in feelings about current situations in the real world, without actually getting in there and naming specific people, which could alienate those who are possibly supporters of them. The way that she got those digs in was done in such a way that it reminds me of all the discussion I had in English classes about how that classic book has all those themes, that I always actually hated talking about.  I mean, I just want to read for the story, and when I do my own writing, whether it is any good or not, I don't know that I throw in hidden meanings or themes.  But McNeil has layered it into the story in such a way that it totally makes me want to apologize to any English teacher I had in school that I might have rolled my eyes at (not to their faces, I was a good student) or been totally bored with the talk of that.

It was a page-turner, one that at certain points I had a lot of trouble putting down.  Even to the point where I had promised myself to start going to bed at a normal time to get ready for school to start again, instead of staying up late reading.

The ending was superb, and definitely left it like a good horror movie would, open.  Although I didn't realize quite how open it was left until I saw a sequel posted on Goodreads as I was getting my review ready today.

Gretchen McNeil has been one of my favorite authors since I first read 3:59 and Ten.   I highly recommend her books if you haven't started yet!  Also, don't you love the cover of this one?  And #DRBC!!
Posted by Lisa Mandina at 7:00 AM