Blog Tour Excerpt with Giveaway: The Moons of Barsk by Lawrence M. Schoen 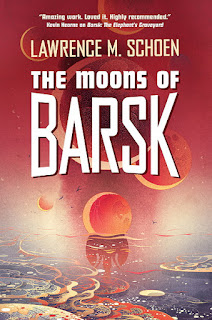 Years after the events of Barsk: The Elephants' Graveyard, the lonely young outcast and physically-challenged Fant, Pizlo, is now a teenager. He still believes he hears voices from the planet’s moons, imparting secret knowledge to him alone. And so embarks on a dangerous voyage to learn the truth behind the messages. His quest will catapult him offworld for second time is his short life, and reveal things the galaxy isn’t yet ready to know.

Elsewhere, Barsk's Senator Jorl, who can speak with the dead, navigates galactic politics as Barsk's unwelcome representative, and digs even deeper into the past than ever before to discover new truths of his own.


Praise for THE ELEPHANTS' GRAVEYARD

“The second you encounter the arboreal uplifted elephants who speak with the dead, you know you're reading a work of singular imaginative power. It's a delight from beginning to end.” —Walter Jon Williams, Nebula Award-winning author of the Metropolitan series

“A captivating, heartwarming story in a unique and fantastic world... as rich and mysterious as Dune.” —James L. Cambias, author of A Darkling Sea

“A heartfelt and wonderfully weird book: a space opera about kindness and memory.” —Max Gladstone, author of the Craft Sequence

“A masterful, onion-layered tale of pariahdom, treachery, and genocide that ultimately reveals the true deathlessness of hope and love.” —Charles E. Gannon, author of Fire With Fire

“Combines excellent characters and a fascinating world. What really makes it work is how he deftly weaves together startling SFnal ideas with character-based intrigue. You'll really care for these characters, even as you find them believably alien. I found it a compulsive page-turner and immensely enjoyable.” —Karl Schroeder, author of Lockstep

“Powerful. Grand in scope, yet deeply intimate. Schoen gives anthropomorphism some serious spirituality. It got inside my head in the way that only an exciting new idea can.” —Howard Tayler, Hugo Award-winning creator of Schlock Mercenary
Excerpt:


THE MOONS OF BARSK


AMIDST torrents of rain and blasts of lightning, Ryne stepped from his boat onto the shore of the last island, the place where his life ended. The mental beacon that had guided him across the open water faded away. Clarity replaced certainty, composed of equal parts confusion and anger. Flapping his ears against the downpour he muttered a phrase heard by his students at least once a tenday for the past six decades. “The math is all wrong!”


He stumbled into the surf, limbs weary after too many days spent bailing just to keep afloat. His left hand grasped wildly before finding the gunnel and he went down on one knee, submerged in water halfway up that thigh.


“How did I miss it? How does everyone miss it?” Despite his aches and fatigue, he heaved himself forward, leaving the water and struggling up onto the sand. His head turned left and right, taking in what he could see of the beach through the curtain of rain. Behind him, a shaft of lightning struck his boat and set it aflame despite the storm. Ryne sniffed at the scent of ozone, acknowledged the sizzle of burning wood, then ignored both as he focused on the math once more. His muttering continued.


“Five and a half million Fant on Barsk … birth rate of half a percent … mortality rate not significantly more as to matter … at least three quarters—conservatively—of whom sail away when they sense their life’s ending … that’s more than twenty thousand people showing up here, year after year, for centuries.…”


But that wasn’t math, that was just arithmetic. Still, it provided a starting point. The bulk of the actual math he shaped into the questions that had assailed his mind, once his need to be here had been slaked by completing the journey and arriving at his destination. Why had he never examined that need? Or its sudden onset? Or how it was simply accepted as part of the natural order of things by everyone on the planet? Or that no Fant on any world in the galaxy prior to the Alliance shoving them all on Barsk—not a single one of them—had ever woken up one morning with the certain knowledge of their coming death and the compulsion to travel to meet it? The slowest of first-year students should have been able to see the incongruities present, and yet … no Fant did. No Fant had, at least, not prior to sailing away. How many million Dying Fant had walked this same stretch of sand, dazed and bewildered as he was now, expecting … something. Something other than just another expanse of shoreline. 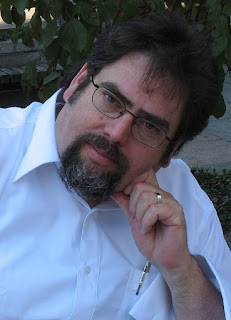 Lawrence M. Schoen holds a Ph.D. in cognitive psychology and psycholinguistics. He spent ten years as a college professor, doing research in the areas of human memory and language. This was followed by seventeen years as the director of research for a medical center in Philadelphia that provided mental health and addiction services. Evidence from both these career paths can be found in almost everything he writes.

He’s also one of the world’s foremost authorities on the Klingon language, and since 1992 has championed the exploration and use of this constructed tongue and lectured throughout the world. In addition, he’s the publisher behind a speculative fiction small press, Paper Golem, aimed at showcasing up-and-coming new writers as well as providing a market for novellas. And too, he performs occasionally as a hypnotherapist specializing in authors’ issues.

In 2007, he was a finalist for the John W. Campbell Award for Best New Writer. He received a Hugo Award nomination for Best Short Story in 2010 and Nebula Award nominations for Best Novella in 2013, 2014, 2015, and 2018, and for Best Novel in 2016. He's received the  Kevin O’Donnell Jr. Service to SFWA Award as well as the Coyotl Award for Best Novel. Some of his most popular writing deals with the ongoing humorous adventures of a space-faring stage hypnotist named the Amazing Conroy and his animal companion Reggie, an alien buffalito that can eat anything and farts oxygen. More serious writing can be found in his BARSK series, which uses anthropomorphic SF to explore ideas of prophecy, intolerance, political betrayal, speaking to the dead, predestination, and free will.

Lawrence lives near Philadelphia with his wife, Valerie, who is neither a psychologist nor a Klingon speaker. 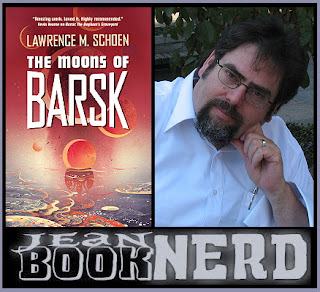 Check out  the rest of the tour HERE.
Posted by Lisa Mandina at 6:30 AM