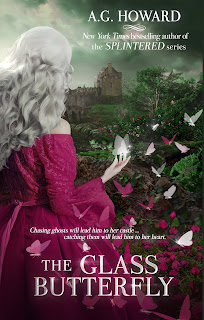 
For close to a decade, twenty-five-year-old Felicity Lonsdale has masqueraded as a dowager almost twice her age—selling caterpillars to butterfly consortiums—enabling her to hide an ill-fated past while raising her late brother’s daughters. Together, the three live on an isolated Irish estate bequeathed by a dying earl. When the earl’s estranged son arrives to claim his inheritance by threatening to expose Felicity’s true identity, she longs to pack up her nieces and run. But a ghostly secret within the castle’s turret holds her captive.

Nick Thornton—a Roma viscount’s heir—is also captive. After a tryst with an investor’s wife nearly destroyed his family’s holiday resort, Nick forsook everything to elope with her. However, a tragic mistake at his hand led to her and his baby’s deaths. Refusing to turn to the family he shamed, Nick travels to seek the countess who once co-wrote a romance with his sister. There’s rumor of a special butterfly in her keep—a transparent-winged species with ties to the afterlife. Nick hopes to contact his dead wife and child, for only their forgiveness can free him.

Upon his arrival to Felicity’s estate, Nick offers to help her defeat the earl’s son, on the condition she allow Nick to investigate her glass butterflies. Felicity agrees, though fears the closer he gets to the ghosts of his past, the closer he’ll come to uncovering her own. As Nick spends time with Felicity and her nieces, he realizes the mystery enshrouding this fragile countess and her castle is more intriguing than the ghosts he originally came to find. And perhaps putting his dead to rest and helping her do the same will be his true path to redemption.

My Review:
If you have followed me for awhile, you know that I am a big fan of this author, and I loved the first two books in this series:  The Architect of Song and The Hummingbird Heart.   This is a series, but it follows a family, and spans years between books.  The first book's main couple are the parents of the main characters in the second and third books.  In this third book we have the son who feels as if he has done nothing but disappoint his family.  That he disgraced them to the point they'd be happiest if he never returned.  Nick is not only running from that, but also searching for a way to reach his dead wife and ask her for forgiveness.  He intends to once again behave poorly by stealing what he thinks he needs, a rare type of butterfly, that will help him be able to reach those beyond the grave.

The other half of the couple in this one is Felicity.  She is the woman with the long white hair you see on the cover.  Only she is not as old as she seems to be. She is hiding from her own past, and trying to keep her nieces safe from being separated with their own parents lost, just like she and her brother were separated when they were children.  She will do whatever it takes to keep these girls from having to go through what she went through.

The connection between the two is based on a past event that was intense, emotional, and life-changing.  Once again this author has created a beautiful world, that she describes with such vivid language that you feel as if you are there as you read.  I  loved the idea of the butterflies, and also the little bit of science thrown in with old tales and quotes from classics, in this case, Shakespeare.  The attraction between Felicity and Nick is also done well.  You can feel the sexual tension between them, both in the way they can barely resist each other, as well as the humorous banter that pops up from the first meeting we read in the book.  The characters are all well developed, and I really loved the youngest niece, she was quite amusing in her set ways of a young girl, and the questions she asked and the comments she made about what she saw going on around her.  The mystery of what happened with the girls' father, as well as what he'd discovered that had led Nick to their door was drawn out in such a way that I was on the edge of my seat, trying to figure it out as I read.  But in the end I was still pleasantly surprised at the creativity of how the author handled the whole situation, and the magical spin she put on it.  I also love how a real family can be one that overlooks things, that is there for each other in the end, and how a bad guy might even have a slight bit of redemption, making every character truly human.

Another great story from A.G. Howard.  And I look forward to the fourth book in the series which will be sister Emilia's story.  I have a bit of an inkling where it just might go.  I can't wait to find out if I have guessed correctly, or if the author will lead me on another merry tale of romance and ghostly intrigue.
Book Blogger Aggregate