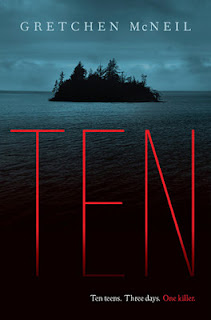 I finally gave in and purchased this book at the RT Convention the first weekend of May.  I'm glad I did.  It was a good read, and definitely a good change from all the dystopian I've been reading lately.  This book reminded me a lot of RL Stine and Christopher Pike type of stories.  Which are good scary stories!  It also reminded me of the movie, I Know What You Did Last Summer.  Not quite the same thing, but definitely it could make a good horror movie.
The main character is Meg, she and her friend Minnie have been invited to a party at the island house of one of the most popular girls in school, that Minnie used to be friends with before Meg came along.  When they get to the island, Minnie's ex-boyfriend's best friend, TJ,  is there to greet them, along with a guy named Ben, who may be the popular girl's latest guy.  But Minnie doesn't seem to care, as she and Ben hit it off right away.  Part of this is because Minnie is trying to make TJ jealous.  See, she's always wanted TJ, even dated his best friend, Gunner, for a long time trying to get TJ's attention.  During that time Meg and TJ became pretty good friends, and Meg began to like TJ, as well as he seemed to like her as well.  But, because of Minnie's crush, Meg had to turn down an invitation to go to Homecoming with TJ.  It seems however as if TJ might still be interested though!.  They get to the house, after walking by another house which seemed to be having quite the party themselves!  There are 6 other people at the house, Vivian, Lori, Gunner, Kumiko - Gunner's new girlfriend, Nathan, and Kenny.  And when a raging storm kicks up, it seems they may be stuck there without the rest of the people coming.  They decide to watch a movie, but all the DVD cases are empty, but one, and it says "Do Not Watch".  Of course they have to watch it, and on it is a mysterious video, showing a countdown from 10-1, and confusing poetry and images, and a menacing message.  Then the power goes out.  The phones are also out because of that, and of course there is no cell phone service.  Meg thinks maybe the internet will work, and goes to test it, but just as she begins to get online, that goes out too.  At dinner, one of the boys, Ben, begins to choke they think, but then they find out it is an allergic reaction to some nuts that somehow made it into the salad.
Feeling spooked and worn out, and having nothing to do with the power out, they all go to bed early.  Meg and Minnie have got the really cool room up in the tower.  Meg thinks she hears someone running barefoot and it wakes her up, so she goes out and sees a body hanging from above.  It looks as if Lori has hung herself.  And there is a suicide note, but something seems off about it.  With no way to contact the police, or get off the island due to the intense storm, the rest of them are stuck in the house, where a wall now has a huge blood red slash.  As one more is found dead, and another, more slashes are added to the wall.  They now must figure out if it is one of them doing the killing, or if there is someone out there trying to exact revenge, and if so, what for?
As I said at the beginning, this was very good.  While I could kind of guess what might happen next, and figure out who the killer might be, (well why a person would do the killing, but not who it actually was), it was still done very well, and kept me thinking and trying to figure out with Meg all along what was going on.
If you're in the mood for a scary story, you should give this a try, if you haven't already!
And, because I must share, below is my picture with the author, Gretchen McNeil, from the RT Convention. 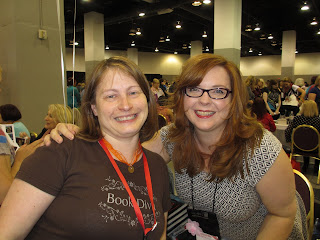