Review with Author Interview: A Touch of Gold by Annie Sullivan 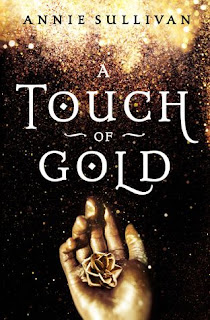 Synopsis:
King Midas once had the ability to turn all he touched into gold. But after his gift—or curse—almost killed his daughter, Midas relinquished The Touch forever. Ten years later, Princess Kora still bears the consequences of her father’s wish: her skin shines golden, rumors follow her everywhere she goes, and she harbors secret powers that are getting harder to hide.Kora spends her days locked in the palace, concealed behind gloves and veils, trying to ignore the stares and gossip of courtiers. It isn’t until a charming young duke arrives that Kora realizes there may be someone out there who doesn’t fear her or her curse. But their courtship is disrupted when a thief steals precious items from the kingdom, leaving the treasury depleted and King Midas vulnerable. Thanks to her unique ability to sense gold, Kora is the only one who can track the thief down. As she sails off on her quest, Kora learns that not everything is what it seems—not thieves, not pirates, and not even curses. She quickly discovers that gold—and the power it brings—is more dangerous than she’d ever believed.Midas learned his lesson at a price. What will Kora’s journey cost?

My Review:
If you've followed my blog for very long, you know that I am a big fan of Fairy Tale retellings. And this book did not disappoint at all!  It was quite a bit of a change in the story, maybe you could say an addition or expansion of the story and the characters in it.  It was a pretty easy read, but had a lot of great world-building.  I liked the ways the author changed or rewrote the whole curse of King Midas, as well as expanding it with the other curses often meted out by the Greek gods.

I liked Kora, Midas's daughter.  You could see how hard it would be for her to be kept so isolated, when all she dreamed of was getting out and exploring the seas.  She has no hopes or dreams of actually finding a man and falling in love, not with how people react to her golden skin, and the fear of what her curse may be able to do.  Then there is Aris, who comes along, and gives her hope that maybe someone could see past her skin, and potentially fall in love with her.  When tragedy strikes, and they must go find the gold that has been stolen, Kora gets to realize part of her dream to travel the seas.  But things won't be all as they seem up front, of course.  Those she thinks she can trust will not be truly reliable, and others that seem to not have her best interests at heart may actually be the ones to come through in the end.

I really liked the story, and loved all the different aspects of mythology and other tales that were woven throughout the plot.  And while it had an ending that was mostly resolved, I can see that there could be a sequel to this, unanswered questions and other issues.  I would say the characters would be good to read more about.

1.  What does your writing process look like? Do you know the whole story when you start?  Or do you just start writing and go with it (seat of the pants writing)?  If you plan it out, how do you do that?  Outline, notecards, post-it-notes, etc.? My writing process always starts with the spark of an idea. As soon as I have that, I like to start writing and see where the story takes me, so I definitely fly by the seat of my pants. I’ve found that I’m more creative that way, and the story flows more naturally then if I try to plot things out before I even have a chance to see the characters on the page. Often I’ll have a general idea of a few stops the story might make along the way, but I don’t like to set anything in stone until I explore the characters and their personalities. I do like to have a vague idea of where the story will end just so I have a direction to head when I start writing.
2.  How do you come up with your ideas for your stories?
I get ideas from all over the place. They can come from rereading old fairytales, watching movies, overhearing a snippet of dialogue and wandering what people are talking about, or even my dreams. Often, ideas come from asking the question “what if” a lot. “What if X happened in a fairytale instead of Y?” “What if this character did this?” “What if I change the genders of these two famous characters? How does that change the story?”
For example, my idea for A TOUCH OF GOLD came from watching the first Pirates of the Caribbean movie. I asked, “What if there was an easier way to collect all that cursed gold the pirates needed to find?” From there, my mind jumped to King Midas because of his relationship with gold. However, since I usually write about strong female characters, I instantly started thinking about his daughter. What if I told her story—her curse?
3.  How important are names in your books?  Do you choose the names based on liking the way it sounds, or the meaning?  Do you have any name choosing resources you recommend?
Names are actually really important to me, but I both love and dread coming up with names. I love it because it really can be fun to find the perfect name for a character. I hate it because I can’t write a character until I know their name. I’m not sure why, but I’ve tried using placeholders before—and it just doesn’t work for me. However, names are often where I hide most of the little “Easter eggs” that I hide in my work. These are usually things that have a lot of significance to my life, so readers may not pick up them right away. But I know they’re there.
Additionally, I do often pick names based on how they sound and based on meaning. Kora, for example, is the main character in A TOUCH OF GOLD. Her name is derived from the Greek word for maiden. I like to add little touches like that to give the story some hidden meaning.
4.   What are your favorite: Books/authors/genres: I love young adult fantasy and sci-fi. Those are my go-to genres. Some of my favorite books right now are Caraval and Legendary by Stephanie Garber, Frostblood by Elly Blake, Kiss of Deception by Mary E. Pearson, and The Lunar Chronicles by Marissa Meyer. In addition to the authors of those books, I love Jane Austen, Meg Cabot, Madeline L’Engle, Shannon Hale, and Lois Lowry.  Movies/TV Shows: My favorite TV show of all time is The Twilight Zone. I know it’s older and not many young people have seen it, but it truly is a masterpiece of storytelling and plot twists. Other shows I love include Project Runway, America’s Next Top Model, and House Hunters. Some of my favorite movies are Beauty and the Beast (the animated version), Seven Brides For Seven Brothers, A League of Their Own, Romancing the Stone, and Pride & Prejudice. I also love pretty much any Disney or superhero movie.  Music: I love listening to music when I write, so music is really important to me. My favorite band of all time is the Goo Goo Dolls. But I love listening to a wide variety of music—everything from Pop to Classical!  Food/Writing snack: Desserts!!! I love desserts so much. Anything from cake to cookies to pie. Although, to be honest, I typically don’t eat when I’m actually writing because I need both hands to type, and if I’m eating, that’ll just slow me down. I save the desserts for when I’ve hit my word count goal for the day. 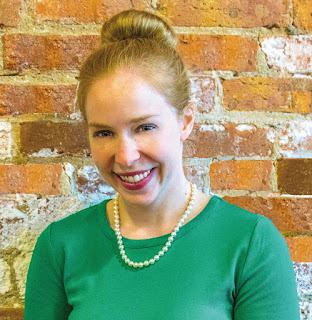 Annie Sullivan is a Young Adult author from Indianapolis, Indiana. Her work has been featured in Curly Red Stories and Punchnels, and her novel, Goldilocks, won the Luminis Books Award at the 2013 Midwest Writers Workshop. She loves fairytales, everything Jane Austen, and traveling and exploring new cultures. When she’s not off on her own adventures, she’s teaching classes at the Indiana Writers Center and working as the Copy Specialist at John Wiley and Sons, Inc. publishing company, having also worked there in Editorial and Publicity roles. You can follow her adventures on Twitter (@annsulliva).
Posted by Lisa Mandina at 2:19 PM