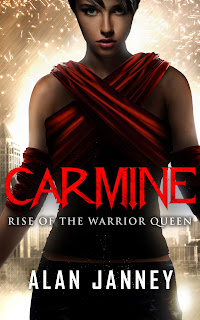 
The girl once known as Katie Lopez wakes up in an abandoned Wal-Mart with no memory, possessing only the vague sense that something has happened.  Where is her family?  Where is her boyfriend?  She has a faint recollection of him, a ghost of a memory.  The world, she discovers, is staggering from the weight of rampaging mutants, victims of a bizarre surgery gone wrong.  Once intended to bring about a utopia, now the victims threaten societal meltdown.  Much to her surprise, the girl with no memory discovers she is their queen.

An Interview with Alan Janney:

Alan’s new book releases in December, about a young girl waking up in a hospital as Los Angeles is being abandoned.  She soon discovers:
1)  that people are fleeing from so-called mutants
2)  she’s queen of the mutants.

A few questions for the author!
1) What does your writing process look like?

I love conflict.  The first thing I do is make a list of all the conflict the main character will face.  For this book, I wrote out ‘Her memory loss, her illness, the terrorist named Walter, the President’s girlfriend, a lack of supplies, her ex-boyfriend, etc.’  I generated a list of about 15 conflicts the protagonist will face.

Then I generate the plot and chapters around those conflicts.

Individual chapters are plotted based around dialogue.  My stories have a LOT of dialogue (although Carmine has less than usual)

I’m other words, I’m not a pantser.  My outline can evolve and change and morph, but there IS an outline.

Ever read Robert Jordan’s Wheel of Time series?  FOURTEEN books long!  And he had notes for all of it, so that when he died Brandon Sanderson was able to pick it up and keep going.  I’m not that good, however.

Have you read Thomas Harris’s Hannibal Lecter books?  Harris has an amazing quote about how he writes.  He says writing is not simply playing make-believe; you have to approach it as though you’re uncovering something that actually happened.

I intended to write a story about a boy solving mysteries, but then he got sick and started climbing walls and throwing footballs out of stadiums.  I did not expect that.  Thus, the Outlaw series was born.  It just happened.

Carmine is book one in a series, and it’s a stand alone adventure.  You don’t need to read anything else to enjoy and understand the story, but there is a backstory to Carmine.  When I was on book two of the Outlaw series, I already had Carmine planned.  And I already have the next series planned too.  I don’t know where the ideas come from.

3)  How long have you been writing? 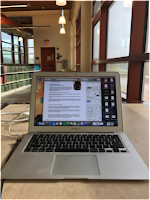 I was in detention my 9th grade year inside our school’s library.  I grew bored so I picked a book off the shelves - The Fellowship of the Ring.

My life changed.  I became a closet geek.  I’d come home from varsity soccer practice and write for an hour on our computer.  Never told a soul.

What was your secret career goal when you were in high school?  I’m living mine - a novelist.

By the way, my career began in a library and I still spend hours there every day.  Here’s a photo of me writing this very article from inside…a library.

4)  What tips do you have for aspiring writers?

And here’s the secret - that book won’t be good.  Mine wasn’t.  Those poems won’t be perfect.  The articles will suck.

But you’ll never ever ever grow as a writer until you write awful stuff and then tinker.  Fix it.
My first draft of Carmine SUCKED. My beta team couldn’t get through it.
So I tinkered.  A lot.  I’m publishing the 5th draft.

You write stuff that sucks and then improve.

My Mount Rushmore of authors:

Vanilla iced coffee!!  EVERY DAY I drink this delicious nectar.

Enter to win one of fifteen free copies of Carmine, OR Amazon gift cards!