Shade Me Rainbow Blitz and Giveaway: Orange You Excited to Read My Review? 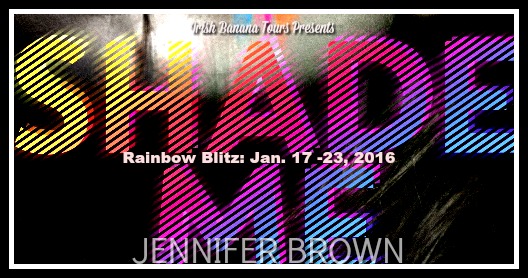 Sorry for the bad pun in the title, I just couldn't resist.  I was so excited to get to be a part of this tour that is hosted by Irish Banana Tours, and to represent orange, because orange is one of my two favorite colors.  Orange is the color that when I see something orange anywhere my eyes are immediately drawn to it.  My 3 year old niece knows it is my favorite color, in fact she will tell people when I'm not around that orange is my favorite color.  The last school that I taught at, for 14 years, our school colors were orange and green.  You can bet I had lots of things in school colors to wear!  Now before I get into my review of this awesome book, I want to share a few of my favorite orange things.  Of course first of all, just look at my blog.  I had to have it orange! 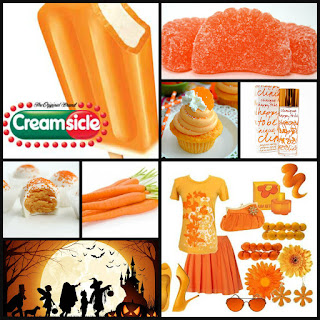 Anything that has the creamsicle, or sometimes called dreamsicle flavor, I will automatically LOVE it!  There was even a flavored bottled water about 20 years ago with that flavor that I couldn't get enough of.  I love the orange slice candy, and anything orange flavored.  Pretty much the only vegetable I like, even though technically it isn't a vegetable, is a carrot.  Halloween is really my favorite holiday, during my favorite month of the year, and that is partly because the color orange is what you think of for that month and holiday.  One of my favorite perfumes for the longest time that I used to get lots of compliments on, and that I still wear occasionally, is Clinique Happy.  I do like oranges themselves, and orange juice, but figured that was too obvious to add to my collage. 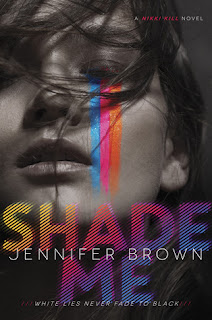 Nikki Kill does not see the world like everyone else. In her eyes, happiness is pink, sadness is a mixture of brown and green, and lies are gray. Thanks to a rare phenomenon called synesthesia, Nikki’s senses overlap, in a way that both comforts and overwhelms her.

Always an outsider, just one ‘D’ shy of flunking out, Nikki’s life is on the fast track to nowhere until the night a mysterious call lights her phone up bright orange—the color of emergencies. It’s the local hospital. They need Nikki to identify a Jane Doe who is barely hanging on to life after a horrible attack.

The victim is Peyton Hollis, a popular girl from Nikki’s school who Nikki hardly knows. One thing is clear: Someone wants Peyton dead. But why? And why was Nikki’s cell the only number in Peyton’s phone?

As she tries to decipher the strange kaleidoscope of clues, Nikki finds herself thrust into the dark, glittering world of the ultra-rich Hollis family, and drawn towards Peyton’s handsome, never-do-well older brother Dru. While Nikki’s colors seem to help her unravel the puzzle, what she can’t see is that she may be falling into a trap. The only truth she can be sure of is that death is a deep, pulsing crimson.

My review:
I am so grateful for getting to be on this tour, and I have to say thanks to Edelweiss and Katherine Tegen Books for allowing me to read an e-galley of the title.  I have to say how much this story really blew me away.  There were tons of twists and turns, and so much excitement as I read.  I loved the character of Nikki, well, except for the smoking, that part I wasn't a fan of.  But hey, the author is known for writing very realistic, and at times hard to read stories, such as the first one of her books that I read, Hate List.   The first thing we learn about Nikki is that her synesthesia, how she sees colors, is keeping her from doing well in school.  She's a loner, and has an ex-boyfriend that can't seem to take the hint.  Her mother was murdered years ago, and her dad leaves her alone all the time when he goes to do photo shoots out of town.  That was one thing that was hard for me to understand.  If your wife has been murdered, why would you not be overprotective of your daughter?  I know that sometimes the reasoning though is the opposite, and it is hard for that person to be around the family that reminds of them of the loved one they've lost.  There are so many details hidden in each step of Nikki's search for the answers behind her all of a sudden connection to Peyton.  Each one opens up a door to a past that Nikki had no idea about.  As I figured from the beginning, there is probably going to be a connection to the murder of Nikki's mother and the whole family drama she becomes involved in with Peyton's family.

All the characters were so great.  The cop really fit in well to the story.  Peyton's brother Dru, the whole time you're wondering, is he really into Nikki, or is he just trying to cover up for what actually happened, and is keeping Nikki close to make sure nothing gets out.  And the family, wow, the family is so steeped in all things bad.  The closer you get to the end, the more you begin to see that Peyton may not have been the girl that everyone saw her as, the popular mean girl of the school.  When the connection between Peyton and Nikki becomes clear, you spend the end of the book hoping that Nikki can beat the clock to save Peyton from what has happened to her, as well as bring the guilty parties to justice.  The way it ended I was glad to see that this is book 1, as there are so many more things that I need to know.  I can also say that I could totally see this as a tv series.  It'd be a show that I'd watch!

One thing that really drew me to the book was the synesthesia aspect.  I have a friend that has this, and it is interesting to learn more about it.  I've been fascinated by this condition since I first read about it in a Discover magazine several years ago.  I feel the way it was put forward in the story gives a pretty good look into how it might be for someone with this.  And along with my favorite color, orange, don't you love how the orange is so bright and pretty on the cover? 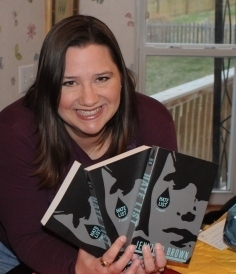 Two-time winner of the Erma Bombeck Global Humor Award (2005 and 2006), Jennifer's weekly humor column appeared in The Kansas City Star for over four years, until she gave it up to be a full-time young adult novelist.

Jennifer's debut novel, HATE LIST (Little, Brown Books for Young Readers, 2009) received three starred reviews and was selected as an ALA Best Book for Young Adults, a VOYA "Perfect Ten," and a School Library Journal Best Book of the Year. HATE LIST also won the Michigan Library Association's Thumbs Up! Award, the Louisiana Teen Readers Choice award, the 2012 Oklahoma Sequoyah Book Award, was an honorable mention for the 2011 Arkansas Teen Book Award, is a YALSA 2012 Popular Paperback, received spots on the Texas Library Association's Taysha's high school reading list as well as the Missouri Library Association's Missouri Gateway Awards list, and has been chosen to represent the state of Missouri in the 2012 National Book Festival in Washington, DC. Jennifer's second novel, BITTER END, (Little, Brown Books for Young Readers, 2011) received starred reviews from Publishers Weekly and VOYA and is listed on the YALSA 2012 Best Fiction for Young Adults list and is a 2012 Taysha's high school reading list pick as well.

Jennifer writes and lives in the Kansas City, Missouri area, with her husband and three children.

I've met Jennifer before, I live in Kansas City as well, so when she came to do a signing at the bookstore where I work, I had to meet her. 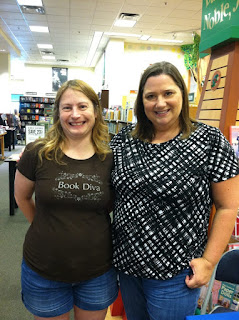