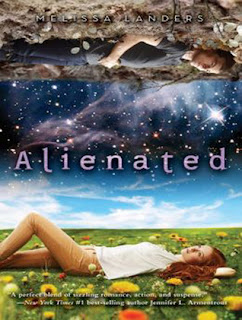 This was the next audiobook I downloaded from my local library.  I'd been hearing constantly how great this book was.  But I had yet to pick it up.  I can't decide if I can count it as part of my It's New to Me Challenge, since technically I started listening to it right at the end of 2015.  But I can tell you that I am hooked on this series now!  I also can't decide whether to just buy and read the 2nd book, Invaded, or if I should listen to it on audiobook as well.  When I was going to do my updates on Goodreads as I read, I had to actually look up stuff online about how names and such were spelled.  Listening, I just assumed that the main male character's name was spelled Alex, the way it was pronounced, I just figured it was Alex with an accent on the A.  But no, it was spelled Aelyx.  Either way you spell it, I might have a little crush on him.

So, as I said, there are two main characters.  One is Cara, and she is a girl from Earth.  The other is Aelyx, a boy, an exchange student, from the planet L'eihr, the first aliens they've come in contact with.  The L'eihr are supposed to be pretty advanced, in fact one of the things that convinces Cara to have an exchange student is that they had given her mother a cure for the cancer that was going to kill her.  The other benefits to taking him in are that she will get a full scholarship to the college she really wants to go to, and she will get to visit the alien planet as part of the exchange program.  There are only 3 L'eihr students coming.  One to America with Cara, one to France, and one to China.  When we first meet the L'eihr, on the trip to Earth, they are talking about something they are sneaking onto the planet. And we find that they do not want to have a treaty with the humans.  So whatever it is they are sneaking with them must be something that will not be good for humans.  Aelyx is Cara's student, and their first meeting, well, let's just say it isn't the way anyone would want their first meeting with someone to go.  Cara is uncomfortable in the spandex that her mother got her to wear under her very tight dress, and so she goes to take it off. But the bathroom is being blocked off because the president is inside.  So she goes and finds a quiet little corner out of the way.  Unfortunately, Aleyx had been using it to get away from the crowd, and so he sees her, basically she moons him.  When they fly home, the embarrassment soon gives way to some annoyance.

Aelyx is very aloof, and also very condescending.  Cara is the valedictorian of her class, and so as you might guess, she likes to win.  So losing the first three games of chess she plays with Aelyx also don't necessarily endear him to her.  Other issues will be that there are many people against having aliens come to Earth.  Her boyfriend Eric, is one of them.  It causes issues and actually shortly after she brings Aelyx home, they break up.  Her best friend Tori isn't necessarily thrilled with the aliens, but at first she is supportive of Cara.  Until pressure from others in the town beefs up.  Soon the group HALO, Humans against L'eihr occupancy(not sure about the last word, but I listened to it, so not sure where to find it in the book at the moment), is causing a ruckus at school.  Not only are they protesting outside of the school every day, their members are everywhere at school, shunning Cara and Aelyx, and then Tori starts losing things, her student council position, her position on the soccer team, etc.  At that point, even Tori deserts Cara.

But the more Cara gets to know Aelyx, the more she even finds things to like about him.  And even Aelyx begins to like Cara.  Something about her, the differences actually between them, draw him to her.  And he begins to regret the plan he and his fellow L'eihr exchange students have put into place to ruin their experiment. And while the girl student in France is having a horrible time, their friend in China is loving it, and really growing to love his family, the way that Aelyx begins to feel about Cara and her parents.  But it may be too late.  The protesters are increasing in number, and also getting violent.  One of the few people in school left to be friends with Cara and Aelyx, a little freshman girl who has been a huge fan of the aliens is pushed down the stairs.  Aelyx has found other things in his research of Earth, going out and taking samples of the water and soil.  Earth has problems besides what he and the others have started.  And those things are all going to lead up to a very big catastrophe.

I won't tell more of the story.  Just know that there is a romance.  It is NOT a love triangle.  Just because Cara had a boyfriend at the beginning, well, he is gone pretty quick.  The romance, it's pretty perfect.  Towards the end there is this one moment, and the way Aelyx shows Cara that he likes her, let's just say it is very hot.  Hot without being too much.  Just perfect.  I'm pretty sure that Melissa Landers writes romantic scenes just about on the same level as Jennifer L. Armentrout, for me anyway.  And hey, there is even a blurb from JLA on the cover of the book!  Listening to the scene in the car on my drive home from work.  I was a little breathless myself!  And nothing happened between them really.

I am on the bandwagon now with this series.  Love, love, love it!   Don't know that I can say enough about how much I love it.  Don't know how when I read the 2nd book I'm going to be able to wait for the third one!
Posted by Lisa Mandina at 11:44 AM