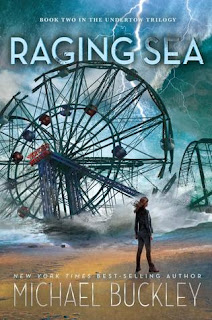 First, I have to say thank you soooooo much to the publisher HMH Books for Young Readers for sending me a copy of the ARC of this when I emailed and requested it.  I loved the first book, Undertow, so much, and you can read my review of it HERE.  While at first this book seemed like it would be a normal 2nd book/road trip story, that didn't last long, and it became an action-packed story where we even learned so much more about our characters and the Alphas.  Again, if you haven't read the first book, you might want to stop, because there will definitely be spoilers for that story here.  I do my best not to do spoilers for this book, but can't help it for the last one.

So, at the end of the last book there was the big battle on the beach, and Lyric was chased away, considered a criminal by the government for something she had done in the battle.  But what she'd done was actually to help humans and save her friends and family.  Fathom, the Alpha boy she had really started to connect with disappeared.  However she has kept her hopes up that maybe he isn't dead, just went to some other place in all the chaos.  Together with her best friend Bex and Fathom's betrothed, Arcade, they take off on the run.  But not just on the run, also on a mission. They must get to a place, Tempest, that is holding their friends and family.  But all they really know is that it is out in the middle of a desert.  So far Texas is a safe place, and people from the west and east coasts are trying to get there as the battles with the Alphas cause their homes to be destroyed.

Along the way they will have to avoid being captured by the law, which wants them as criminals to the US, also other people will kill Arcade for being what she is.  So they must accept help from sympathetic people, including other homeless teens, misplaced by the battles.  When they get separated after Tempest people attack the place they're hiding, Lyric must travel on her own to Tempest, knowing that Bex and Arcade are probably there now with the others that she loves.  When she finally arrives at Tempest, things aren't quite what she expected.  At first she is tortured and they try to control her to do their work.  Finally after several escape attempts, things change again.  An unexpected love one shows up, and she feels betrayed, but will find that maybe Tempest might have something she can use to fight all the Alphas and other creatures that are battling the United States.

As I got to the end, I kept thinking, there is no way there are enough pages left in this book to finish the big battle, and I was pleased to go on Goodreads and find that there will be a third book.  While there is a big battle at the end of this, of course there will be some MAJOR loose ends left in how the battle ends, including what Lyric sacrifices to save her family, and how it will affect her wearing the glove that gives the power over water and stops her headaches.  And now, I can't believe I have to wait over a year for the final book!

A great story, as it reminded me of the very short-lived tv show Starcrossed, this went where I could have seen that show going eventually, except the book is with undersea creatures, not aliens.  A very original series, highly recommended.
Posted by Lisa Mandina at 11:43 AM