Review: Will to Survive (The Rule of Three #3) by Eric Walters 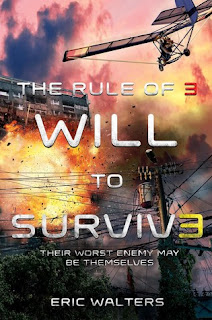 First, thanks to Edelweiss and the Publisher, Farrar, Straus and Giroux Books for Young Readers, for allowing me to read an egalley of this final book in this series.  The books have gotten better as they've gone.  And this is a pretty good way to end the series.  Obviously I can't talk about this third book without any spoilers for the first two books, so if you haven't read them, you can go to my reviews here, The Rule of Three, and Fight for Power.

We start right back into the action with Adam, after Brett has tried to hijack the plane and kill Adam's neighbor Herb.  In order to save himself and the plane, Adam had to make the horrible decision to kill the two men who were trying to make him fly the plane to where Brett told them to.  After he's able to get away, he has to tell everyone what is going on.  And soon they find out that Herb had been sleeping in a safe room in his house, and so when the guys had shot him, they'd only shot a pillow that was in his bed, fluffed up to look like he was there.  Even though Brett is now gone, they know he is probably not gone for good.  And one thing they know they have to do is stop him from getting back to the military group and alerting them.  So they do what they can, they strike out first, and drop a bomb on the military base.

Within the town they continue to work on trying to keep things going.  Part of the ideas they have include reaching out to other communities nearby and seeing about trading things.  Including a trade with a community at a local power plant that also makes propane or some other kind of gas.  As they are out flying around, Adam's girlfriend wants to fly over the city and see what it looks like.  But on this kind of unauthorized flight, an old war plane shows up and escorts them to a nearby island.  On this island is an old airport with an old airplane museum. That is where they got the old warplane.  It is a museum that Adam had been to with his father when he was younger.  On the island they have a pretty good situation.  At first Adam is unsure if they are going to try to steal the plane from him and Lori, and strand them there.  They are allowed to leave and they go back to talk with Herb about the island people.  They decide it is another community that will be worth joining together with.  Soon they begin getting attacked by Brett and his new group of followers.  They are able to use the fact that he believes Herb to be dead in order to get some things snuck past him.

In the end it comes down to a final confrontation with Brett and his group, and they must triumph, but now they will have all their different communities to send help and support.  And hope that in the end they can begin to work on keeping their lives going as comfortable as possible and hope that one day maybe all can get back to how it was.

There was lots of action, intrigue, and even emotion in this book.  I really knew the characters by now, and it was good to find out how their lives were going.  I feel like so much that was being done makes sense in what you would do in this type of world.  The characters on The Walking Dead could take some cues from this group.  :-)  Another great post-apocalyptic series that is great to recommend to boys who want a male main character.  But a good story for anyone to read.
Posted by Lisa Mandina at 7:00 AM