Review: Working it Out by Rachael Anderson 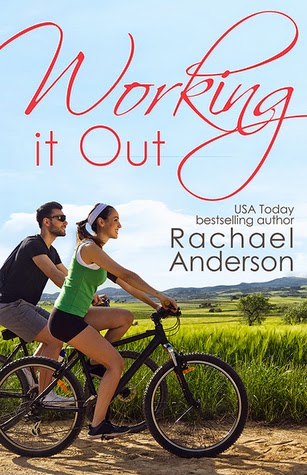 Thanks to Kathy at I Am a Reader for allowing me to read a copy of this and be part of a review group for this title.

Working it Out is a very quick, cute romance.  It was a fun read, with interesting, but somewhat predictable characters.  The story itself wasn't really that different from what you'd expect in a romance. But that's okay as it was still a good, quick, clean read.

There are basically four main characters:  Lanna and her friend Seth, Grace and her brother Alec.  So we get two romances out of the story.  Lanna works for an after school program for children that runs off of donations.  She is getting ready to have a bachelor auction to raise money.  She wants her friend Seth to be one of the bachelors.  Seth has done pretty well for himself in his work, and he has money that he wants to use to help.  But Seth's preferred method of helping a charity is to give money.  He's willing to donate $20,000, but he doesn't want to have to do anything, like be auctioned off.  Lanna refuses to just take money from him, she feels wrong about it.  Grace is a physical therapist who has a brother who became a paraplegic after an accident when they were in high school.  She ends up at the auction to help out her coworker who needs her to bid on him because his girlfriend won't be there and he doesn't want anyone weird to end up "winning" him at the auction.  Seth tries to get around Lanna's forbidding him of just giving money by showing up at the auction at the last minute and bidding his $20,000 on the last bachelor, which just happens to be Grace's friend.  When Grace is very angry at him for ruining the plan, he tries to make up for it, jokingly, by kissing her.  She leaves extremely perturbed.  But as far as she knows, she'll never have to see this infuriating man again.

Wrong.  Seth, once again due to his being well off, injures himself in a heli-skiing accident, and his doctor sends him to the best physical therapist in town, Grace.  Once there he decides that he is intrigued by her, and sets out to win her over.  But Grace is dealing with the guilt of what happened to her brother Alec, and wants more than anything to bring him out of the shell he has built around himself.  Seth is able to help with that, and not just to win her over, Seth really is a good guy.

If you're looking for a cute, clean romance, this is a book for you. As I mentioned it is pretty predictable, I could see where it all was going pretty quickly.  But it was a quick read, and definitely a bit of no heavy thinking required read.
Posted by Lisa Mandina at 8:50 PM

Email ThisBlogThis!Share to TwitterShare to FacebookShare to Pinterest
Labels: Blog Tour, I Am a Reader, Rachael Anderson, romance, Working it Out