Dream a Little Dream (The Silver Trilogy #1) by Kerstin Gier 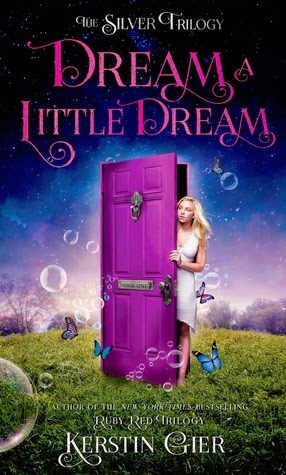 First, thanks to Henry Holt and Company Books for Young Readers, as well as Edelweiss for allowing me to read an e-galley of this back in December.  For some reason I thought it was going to be published in January, so I read it earlier than I probably had to. But the only bad thing about that, is that now I have to wait even longer than I thought for the next book in the series to be published I guess, and I LOVED this one!  I was a huge fan of the Ruby Red trilogy, and so was very excited to see this come available on Edelweiss.

The main character in this book is Liv, short for Olivia.  Her mother and father are divorced, and she has a younger sister named Mia.  Their mother travels for her job a lot, and so they have lived in many different places.  The book begins with the current move to London.  When they arrive they find out that the little cottage they'd been looking forward to living in has been replaced with an apartment in town. The reason?  Their mother seems to have fallen in love.  They meet this man, who is nice enough.  He has twins, Grayson and Florence who are a little older than Liv.  They both go to the school where Liv and Mia will be able to go now.  And the night they first meet at a dinner, it seems that they are going to be moving to live in the same house together.  When Liv makes a mess on her clothes, she ends up borrowing a sweatshirt from Grayson.  Later that night she runs into Grayson in her dreams.  As well as some other boys that go to her school.  Of course she knows she is just dreaming, and she's always had pretty vivid dreams that she can remember.  This dream seems to be more real feeling though.  And the next day when she sees all the boys at school, it is as if they remember the dream too.  Soon the boys have a proposition for Liv.  They want her to help them out with a game they started about a year ago.  A game they started with a girl named Anabel, who has since moved away.  The "game" had to deal with raising a demon, and one of the caveats was that one of the participants had to be a virgin.  Turns out Anabel wasn't what they needed.

Grayson, and one of the other boys, named Henry, both kind of try to talk Liv out of joining them. But her curiosity wins out and she joins in. The realistic dreams and other things really have her attention.  And Liv loves a good mystery, or puzzle, one that she has to solve. The more complicated, the better.  Along the way it seems maybe Henry might be a pretty good guy, and maybe, just maybe, he might feel the same way about her that she is feeling about him.

I just love the way the author writes her characters, just like in the Ruby Red trilogy, I love the sarcastic conversation.  I love that Liv will catch herself when she is describing Henry with very sappy, silly words like, "had I really just thought his hair looked like spun gold in this light?"  I also love that their dog, Princess Buttercup, is a dachshund!!  My favorite type of dog.  The only thing I didn't like?  That the ending seemed to be pretty much wrapped up, until a little twist at the end.  But, the good thing about that is that it means there are more stories with these characters that I love so much for me to read.  If only I read German so that I could read the 2nd one already!  If you loved the author's earlier trilogy, I think you'll love this one as well.

One last fun thing, the door on the cover is basically Liv's door in the dream world.  Everyone has a door to their dreams.  At the end of the book, the author tells what her dream door would look like, and then asks the readers what would their door look like?  I'm thinking mine would be pink and have a doorknob with a dachshund head, or else a door knocker that was a dachshund that would bark it's head off when someone knocked.
Posted by Lisa Mandina at 9:29 AM