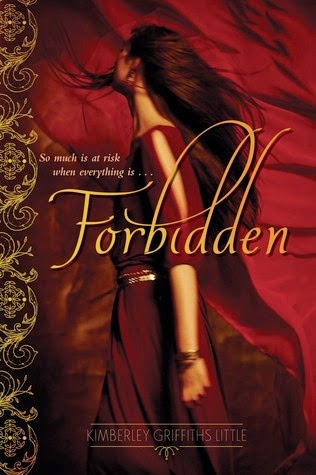 I have to thank Dena at Batch of Books Tours and the author, Kimberley Griffiths Little for allowing me to read a copy of this as part of a tour/promotion.  I had heard of it last year, maybe it was one I'd hoped to get at BEA?  Not sure.  I have to say I'm so glad I signed up for this because I loved the book!  The only bad thing?  The fact that it wasn't a standalone like I'd thought, and now I have to wait until book two comes out, which may not be until January 2016!!!

The book is set in ancient times, in the desert of Mesopotamia.  The main character is Jayden, who is getting ready to dance the dance that will make her officially a woman in her tribe.  And not only that, later in the year she is going to marry her betrothed, Horeb.  Horeb is the son of her dad's best friend, who is considered her uncle.  And her uncle is the leader of their tribe.  So marrying Horeb will make Jayden a princess, and she will live a life of riches once she is married.  At one time Horeb was a friend, but now he has changed.  Lately he only makes her feel uneasy, and she soon grows to dislike him greatly.  The morning after her dance to become a woman is the day the tribe is packing up and heading to their summer camp.  Her mother goes into labor however, but most of the tribe is already gone.  So even as Jayden goes running for help, it all ends tragically.  Her mother finally has a son, who doesn't make it, and a daughter.  But her mother also doesn't make it.  And now Jayden, her father, and her older sister Leila must leave and try to catch up with the rest of their tribe.  And they  have no idea how they will get milk for the baby sister.  When a nursing mother agrees to take the baby, even after the mother and her family part ways, Jayden vows to get her sister Samrhil back as soon as she can.

Jayden helps her father to bury her mother, and then as her father finished packing their belongings to move on, she does a dance for her mother.  She is startled by a feeling of being watched and looks to see a stranger.  She is worried, but the stranger comes over and promises that he means no harm, even giving her his weapon to lead him back to camp with.  There they find out he has been injured and they help him out and bring him along to keep him healing. This stranger, Kadesh, says he is from a land far to the south, where they have frankincense, a very rare and valuable item.  Along the way Leila will confess how she wants only to go join the temple of Ashtaroth, who along with the god Ba'al is worshiped in Babylon and other cities.  Leila lost her betrothed in a war, and he had been Horeb's older brother.  Jayden will become friends with Kadesh, and even feel like if only she could break her betrothal, he would be the one she was meant to be with.

They will deal with tribes that give them a raw deal, taking many of their few camels, for using the wells along the way.  They will finally make it to their summer camp, but not without almost starving and becoming very dehydrated. Once they reach the camp, Jayden finds Horeb's actions and manners even more horrible, now that she has been around Kadesh.  She will wish for more as Horeb's sister has her wedding to a man she loves.  But to let anyone know how she feels about Kadesh would shame her family and tribe.  She must try to keep her sister from running off to the temple where they worship stone idols and do things that are shunned by her family and tribe.

Love, love, love this book!  Highly recommend it!
Posted by Lisa Mandina at 8:00 AM